John McDonnell's Labour Conference speech outlined a vision for the future, and everyone should listen - Canary 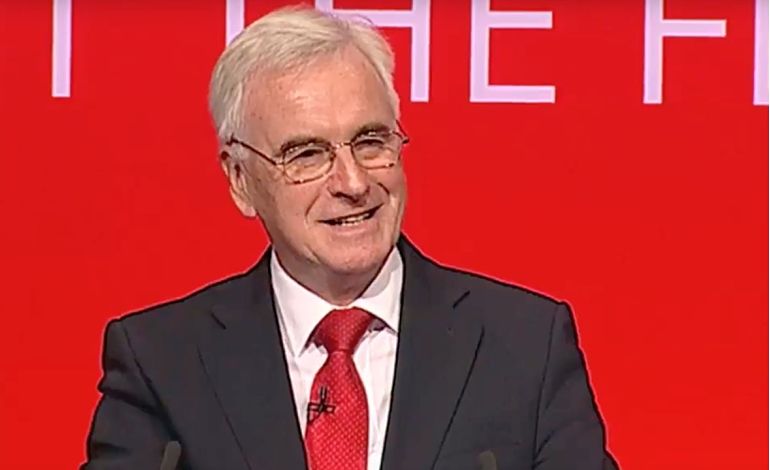 Shadow Chancellor John McDonnell addressed the Labour Conference in Brighton on 25 September. With the Tories in disarray over Brexit and likely to implode at any moment, he delivered a positive vision for the future.

McDonnell made a strong case for Labour’s key role in recent history. The Conservatives have been in power for 42 of the 72 years since the end of WWII, although Labour governments have often been formed at critical moments. McDonnell stated [3:27]:

It has been the role of Labour governments to lead our country into each new era. It was the Attlee Labour government that built a new society from the debris of the bombsites after the Second World War… The Labour Party fulfilled its promise by creating the welfare state.

He made similar points about the Wilson governments of the 1960s, and even the Blair / Brown ‘New Labour’ administrations of 1997-2010. Despite the controversy attached to their name, he praised [5:24] the latter for:

recognising the scale of investment that the 21st century needed.

But McDonnell would be very aware that many pro-Tory media outlets claim that a Labour government would take the nation “back to the seventies”. He therefore quickly moved on from history to discuss the new era. McDonnell described the coming age as “the fourth industrial revolution”, and depicted a progressive social movement with its finger very much on the pulse.

The issues of now

A Labour government, McDonnell said, would end the damage caused by seven years of ideological austerity. It would invest properly in public services and use scientific breakthroughs in artificial intelligence and robotics. As these things forever alter the job market, McDonnell confirmed [6:55] Labour’s view:

We’re determined that Britain embraces the possibilities of technological change… we can use the state to help shape Britain’s future in this new world… in robotics, in electronic cars, in clean tech, in the smart city.

McDonnell delivered a vision for the economy with similar energy. He stated [8:34] that diversification is important, and that investment must be encouraged into:

reconnect the financial sector to the economy of research, development and production.

In this way, McDonnell predicted, the economy would be revolutionised and the culture of money as debt, abandoned.

A government in waiting?

As the Conservative Party continues to commit slow suicide over Brexit, McDonnell set forth a clear and lucid vision for the coming era. These issues are simply not addressed by the current Tory government. Labour, meanwhile, was presented [3:14] as a party which would form:

A government that can set the political agenda for a generation.

At the moment, it is very difficult to disagree.

You can watch McDonnell’s speech in full here: