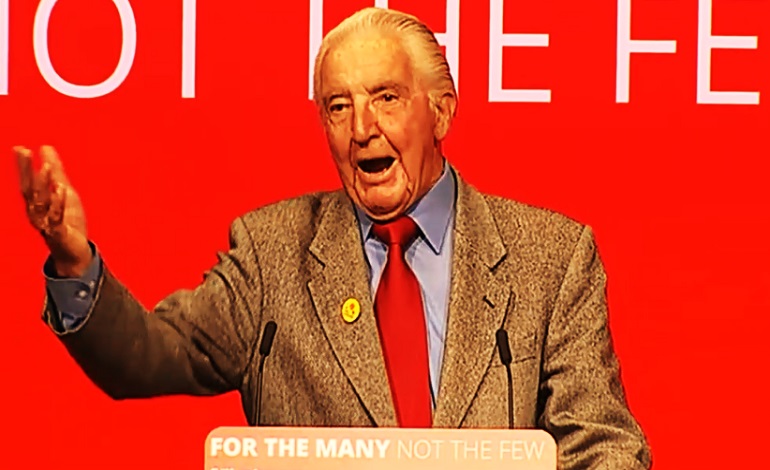 Veteran MP Dennis Skinner gave arguably his most impassioned speech to date to the Labour Party conference on Monday 25 September. And in an overarching address at the Brighton Centre, he took aim not only at anti-immigration rhetoric but also at corporations, Tony Blair, and even Sports Direct boss Mike Ashley.

The so-called ‘Beast of Bolsover’, now 85 and the MP since 1970 for the small town in Derbyshire he gets his nickname from, opened his speech by calling [0:50] this year’s conference “tremendous”. And he went on to say [0:54] it had been a “tremendous year”:

Mainly because of the election of our new leader, Jeremy Corbyn and all the people that represent us on the Front Bench.

I worked with Poles and Lithuanians… And do you know why there was never an argument in the pits? Because they had the same money as us, and they were in the NUM [National Union of Mineworkers].

Skinner was making a reference to the current Brexit debate, where his vote with the government on the EU Withdrawal Bill drew criticism from some. But as he told The SKWAWKBOX, his opposition to the EU comes from:

Workers being exploited… disadvantaging working people by undercutting wages and conditions… All that nonsense Mike Ashley does of dragging people about for a pittance is enabled by the EU.

Sports Direct owner Mike Ashley seems like a thorn in Skinner’s side, as Skinner slammed him again during his conference speech, saying [2:23] that, on a site that used to be a coal mine:

There is now a man called Mike Ashley, who just happens to own Newcastle United as well…

But Skinner then doubled up, taking aim at Ashley and firing in a dig at Tony Blair as well:

He noted [3:26] that, under Corbyn, the Labour Party was “alive and well and kicking”. But Skinner, referencing [3:53] how – after 1945 – Labour built the NHS, council housing, and got “rid of the vandalism that had been caused prior to WWII”, advocated more borrowing for Labour Party spending. He said [4:22]:

When the private sector expands, where do you think they get the money from? They borrow it… And they don’t take it out of their own safe. When Tesco’s expands, do you think for a minute they go to a Tesco’s safe and get the money out? Of course they don’t. They go in somebody else’s safe…

He then got rather impassioned [4:58] about the media and the thought of “the Queen’s head being privatised”:

Vote Labour! The Beast says so!

And in traditional Skinner style, he ended [6:04] with a raucous “Vote Labour! I can’t wait for it! All power to your elbow!”; leaving one NEC member somewhat gobsmacked, right at the end of the applause:

Skinner’s talk of borrowing to invest unsettled some within the party, especially so-called ‘moderates’. And there were others who were still unforgiving over his vote on the EU Withdrawal Bill. But there’s no denying that the Beast of Bolsover is still a tour de force as a speaker. And his passionate and zealous delivery, as well as the reception from the conference floor, shows that the Labour movement, by and large, is still fired up by the former miner from Derbyshire.