As Trump stoops to a new low, the public response has been perfect [TWEETS] - Canary Workers’ Co-op 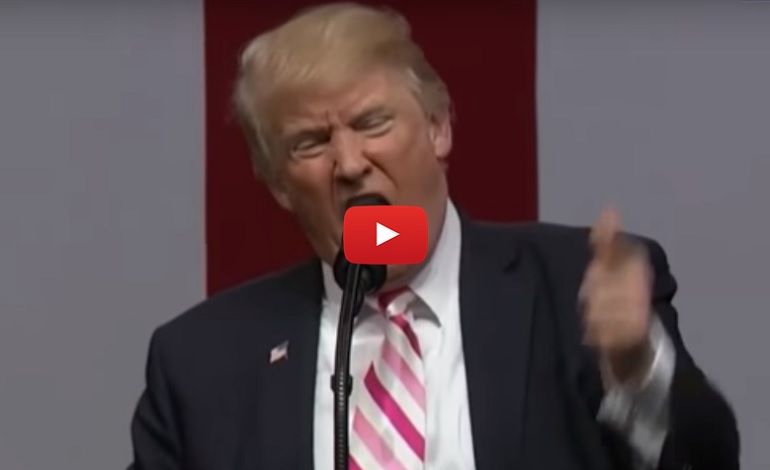 On 22 September, US President Donald Trump spoke at a rally in Alabama. And his words saw him stoop to a new low, as he used some of the strongest language of his presidency so far to insult people who’ve been protesting against injustice.

American football player Colin Kaepernick has provoked much debate in the last year for refusing to stand for the US national anthem, in protest over police murders of African American citizens. And Trump made reference to this in his speech, saying:

Wouldn’t you love to see one of these NFL [National Football League] owners, when somebody disrespects our flag, to say, ‘Get that son of a bitch off the field right now. He is fired.’

The very moment Trump calls Black NFL players "son of a bitch" and yells that they should be fired.

Journalist Shaun King responded to this comment by tweeting:

Very revealing that the harshest language Trump has ever used as President was reserved for Black men protesting injustice. https://t.co/v2I6tf5ZHq

And people didn’t just point out Trump’s apparent hypocrisy. In the wake of his speech, people across the US criticised him for a number of reasons.

But perhaps the best response came from Colin Kaepernick’s mother, who responded to Trump’s “son of a bitch” comment by saying:

Guess that makes me a proud bitch!

In response to Trump’s comments, American football games on 24 September saw over 100 players participate in the largest national anthem protest since Kaepernick started protesting back in 2016. And even the NFL itself criticised the President’s “divisive comments”.

The disappointment among many sports stars was clear:

It's really sad man … our president is a asshole

The president of the United States should never use the word SOB [son of a bitch]. That’s just 100 percent inappropriate. I’m embarrassed because he… got a rousing reception when he said those things… it hurts me that those ignorant folks in Alabama would applaud something so stupid.

Other critics on social media, meanwhile, began to question the true meaning of the word ‘patriotism’. Especially given that the First Amendment of the US Constitution protects citizens’ right to freedom of expression – even if that means protests against American symbols like the national flag; and that one Supreme Court ruling states that the US government “may not prohibit the expression of an idea simply because society finds the idea itself offensive or disagreeable”.

Patriotism isn't about making everyone stand and salute the flag.

Patriotism is about making this a country where everyone wants to.

OK for some but not for others?

And just in case some people disliked anthem protests but were fine with actual disrespect for the US flag, The Huffington Post outlined a number of disrespectful acts, and insisted:

Also, considering that some fans booed the NFL anthem protests on 24 September (and Trump approved of this), one Twitter user said:

So kneeling quietly is disrespectful but it's ok to shout & boo during anthem 🙃 Because, again, this is about racism, not patriotism https://t.co/U7ohMadtzN

The following cartoon seems to capture this sentiment perfectly:

Who did this? LOL! pic.twitter.com/wGEobq9iBR

Some people addressed Trump’s anthem-related comments directly. But others slammed what they saw as the President’s messed-up priorities.

The neglected US territory of Puerto Rico, for example, was recently “destroyed“ as Hurricane Maria made landfall. The storm – reportedly the island’s strongest in over 80 years – plunged 3.4 million inhabitants into darkness. And as local officials called the scenes “apocalyptic”, journalist Jamil Smith said:

An entire island full of Americans in Puerto Rico are without power right now, and @POTUS is cursing out NFL players at his campaign rally.

But then, people in Puerto Rico often receive different treatment from people on the mainland. As New Republic writer Emily Atkin wrote recently, there is an “environmental tragedy” on the island that has created “situations that, frankly, we would not accept.. in the mainland United States”. Also, while Puerto Rico ‘belongs to‘ the US (with the latter ‘making the rules’), its people can’t vote in presidential elections; and as Slate described in June:

Although Puerto Ricans fully pay into the U.S. Medicare, Medicaid, and Social Security systems, they cannot collect the same benefits as citizens in the 50 states

Author Kurt Eichenwald was just one of the people who found it hard to believe the fuss going on about national anthem protests when millions of people in a US territory were in the middle of a disaster:

The number of ppl I've encountered screaming about America, flags etc who don't know Puerto Ricans are US citizens has left me in disbelief.

Overall, as Trump stooped to a new low by using offensive language to score a political point, the public response has been excellent. But the devastation of Puerto Rico is just one of many tragedies that should be much higher on Trump’s list of priorities. And it brings shame on both him and his supporters that it’s not.

– If you’d like to help Puerto Rico in these difficult times, see here.

– Read The Canary‘s previous articles on Puerto Rico, Black Lives Matter, and the NFL. Also see more from The Canary Global; and follow us on Facebook and Twitter.