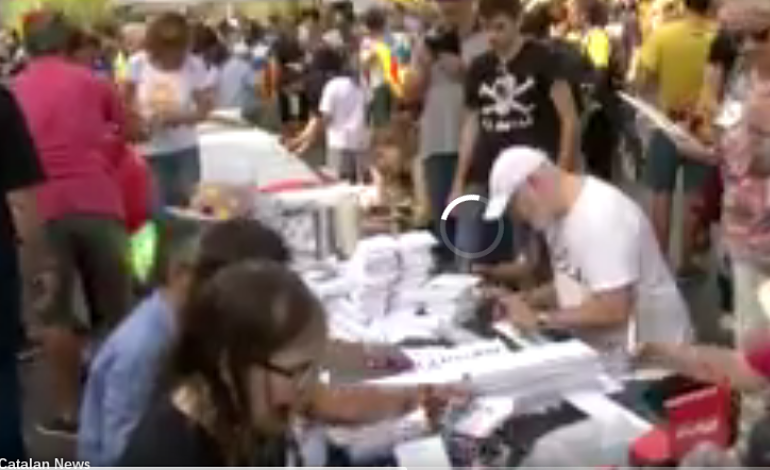 But the people of Barcelona, and Catalans generally, have a long history of resisting authoritarianism. And they have now taken matters into their own hands in a number of ways.

The game is on

On the weekend of 23-24 September, pop-up print shops appeared on streets in locations across Catalonia. The printing machines are used to print out ballot papers, as well as posters promoting the referendum. And citizens are printing and distributing the ballot papers en masse.

Already, more than a million official ballot papers have reportedly been printed and distributed in this way.

The current crisis escalated when police raided print-works and newspapers to seize more than 10 million ballot papers, and even voting boxes.

The crackdown saw more than 700 officials taken in for questioning. And the Guardia Civil (paramilitary police) raided the offices of three Catalan government ministries: Economy, Governance, and Social Affairs. Several Catalan government buildings were raided too, including Finance and the Telecommunications and IT headquarters.

There is some irony with the latter because, during Spain’s civil war, it was the Telephone Exchange that became the symbol for control of Barcelona.

A Spanish own goal?

The ships that are used to accommodate the riot police were tracked by National Confederation of Labour (CNT) dock workers, who refused to service the vessels.

And it’s been reported that defence committees, in the style of the 1936 Spanish Revolution, are now springing up across Catalonia to defend the polling stations.

And the colonel’s brother just happens to have been the president of the Constitutional Court that declared a previous Catalan independence referendum unconstitutional.

The clock is now ticking, as the day of the planned referendum approaches.

And what happens over the next few days will be pivotal. For this struggle is no longer about secession; but the emergence of a progressive social movement that has had enough of centralist, authoritarian rule.