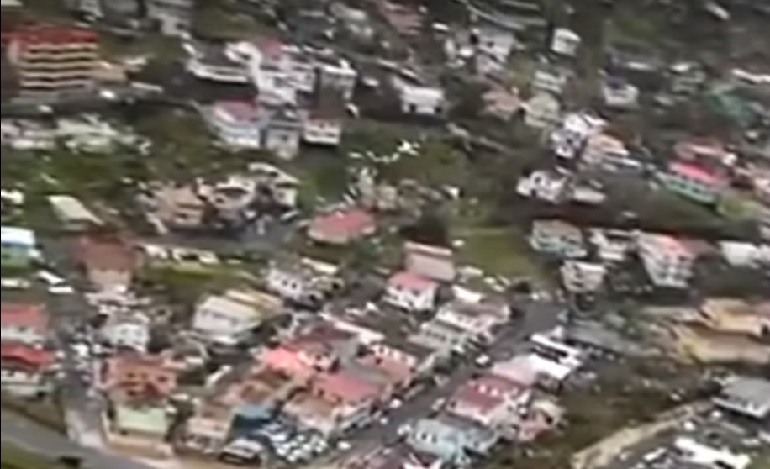 On 19 September, Donald Trump threatened “to totally destroy North Korea”. But just a day later, it was the neglected US territory of Puerto Rico which would be “destroyed“, as Hurricane Maria made landfall. The storm – reportedly the island’s strongest in over 80 years – plunged 3.4 million inhabitants into darkness and killed at least 13 people.

From bad to worse: “financial crisis”, “environmental tragedy”, and US neglect

According to Puerto Rico’s Governor Ricardo Rossello, the damage that Maria caused to the island’s electricity grid meant that restoring power could take months.

New Republic writer Emily Atkin, meanwhile, wrote recently about how Maria was going to make an already existent “environmental tragedy” in Puerto Rico “even worse”. Part of this, she explained, was down to the US territory’s “extensive financial crisis”. And she described “situations that, frankly, we would not accept.. in the mainland United States” – including landfill sites “overflowing with liquid garbage” and piles of coal ash up to five storeys high – which would only be made worse by the hurricane.

On 22 September, meanwhile, authorities issued an evacuation order to tens of thousands of people on the island after damage to a dam meant it could collapse at any moment.

How did a US territory get to this point?

Territories like Puerto Rico ‘belong to‘ the US, and the latter ‘makes the rules’. People can vote in US primaries, but not in presidential elections. Also, as Slate described in June, another quirk of Puerto Rico’s status is that:

Although Puerto Ricans fully pay into the U.S. Medicare, Medicaid, and Social Security systems, they cannot collect the same benefits as citizens in the 50 states, which shifts more of their health care costs onto the territory’s government.

And that’s not all. As Slate pointed out:

After 10 years of recession, Puerto Rico’s unemployment rate is at 11.5 percent, and the territory owes $74 billion in debt.

Because Puerto Ricans can get US passports, however, 400,000 people have fled to the mainland since the recession started. Some have called this a “mass exodus” caused by “US imposed” crisis.

Puerto Rico is a strategic foothold for the US in the Caribbean. And some people blame the island’s economic problems in part on what they call its “colonial status”. Puerto Rico has a long and turbulent history of fighting for independence from the US. And as The Huffington Post‘s Maru Gonzalez wrote in 2016:

Since the U.S. invasion of Puerto Rico in 1898, Washington’s relationship with Puerto Rico has been one of exploitation and convenience. From the Ponce Massacre and government-sanctioned programs aimed at forcibly sterilizing working class Puerto Rican women to unethical testing and human radiation experiments on Puerto Rican prisoners, the U.S. government has a shameful track record of transgressions on the island.

Trump – stop the point-scoring and focus on Puerto Rico

When the US first occupied Puerto Rico, it also occupied Cuba. But the Cuban Revolution in 1959 fundamentally changed the dynamics of US-Cuban relations. To punish the country, a US embargo soon followed and, in 2014, Cuban officials argued that these sanctions had cost the island $116.8bn. Although Barack Obama began to change the US stance on Cuba towards the end of his presidency, Donald Trump has pulled this policy into reverse. And Trump’s recent speech at the UN made Washington’s renewed hostility towards Cuba clear.

But instead of scoring political points against Cuba and other countries, it’s the devastation of Puerto Rico – and the tragedy that has long been unfolding on the island – that should be Trump’s focus as US President. Rather than looking into other countries’ backyards, he’d be much better off sorting out his own backyard first.