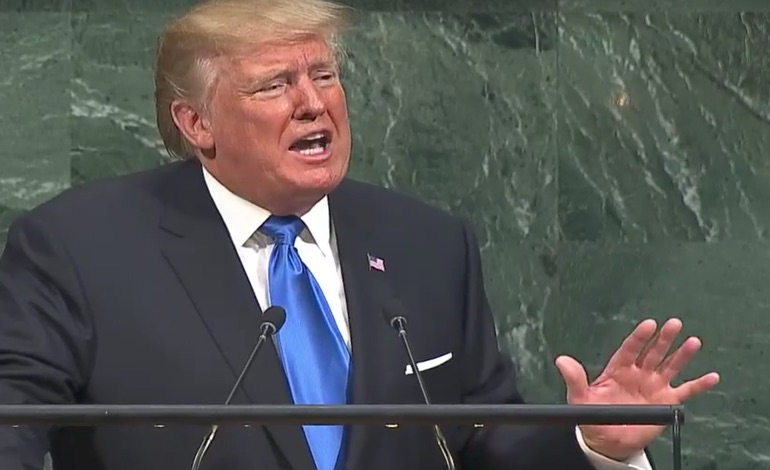 US President Donald Trump gave his first speech to the UN General Assembly (UNGA) on 19 September 2017. He made frequent references to ‘world peace’, and was critical of many countries and regimes around the world. But it was what he didn’t say, and the countries that he didn’t attack, that was most revealing – and worrying.

The ‘strongest military ever’

Trump bragged that the US “will be spending almost $700bn on our military and defence”; and that “our military will soon be the strongest it has ever been”. He also praised America’s supposed history of not trying to “impose our way of life on others”. And he claimed the US is “guided by outcomes, not ideologies”.

The UNGA is assembled from all 193 members. And it is the only UN organ where each member nation has a vote. Speaking to representatives from these countries, Trump mentioned ‘sovereignty’ (a state’s authority to govern itself) on numerous occasions. But as he continued, it became increasingly clear that he was not referring to all UN member states.

Trump spoke, for example, of “small regimes” that the “righteous” needed to “confront”. And the list of US ‘enemies’ began to flow. And despite his references to respecting the sovereignty of other nations, he went on to make threats and call for regime changes around the world.

As The Canary has reported, tensions between the US and North Korea have been rising. And Trump’s latest rhetoric will do little to ease diplomatic relations. Not least because he said:

The United States has great strength and patience, but if it is forced to defend itself or its allies, we will have no choice but to totally destroy North Korea.

While the issue of sanctions for North Korea is far from simple, and there was no mention of the billions of dollars the US will make selling weapons to South Korea, the threat of ‘total destruction’ is unlikely to help anyone.

The US President then turned his attentions to Iran, calling it a “murderous regime” which “masks a corrupt dictatorship behind the false guise of a democracy”.

As The Canary has reported, Trump has been ramping up tensions with Iran since he came to power:

But not because of democracy or human rights. Instead, his hostility is largely because Iran’s regional enemies, Saudi Arabia and Israel, are US allies; because there’s a barely reported conflict occurring over oil pipelines in the Middle East; and because Iran does not bend easily to America’s will.

Although both Iran and Saudi Arabia have equally poor human rights records, for example, Trump made no criticism at all of Saudi Arabia. In fact, he claimed that Iran had “fuel[ed] Yemen’s civil war”, while completely ignoring Saudi Arabia’s key role – and alleged war crimes – in the Yemeni conflict.

Nor did Trump mention the ongoing atrocities committed by Israel in the Occupied Palestinian Territories. So it comes as no surprise that, since Trump’s speech, Israel’s Prime Minister Benjamin Netanyahu has said:

In over 30 years in my experience with the UN, I never heard a bolder or more courageous speech.

Trump also criticised Iran for ‘restricting internet access’, ‘shooting unarmed student protesters’, and ‘imprisoning political reformers’. But there was no mention of US allies like Turkey which have reportedly committed the same abuses.

Guided by outcomes, not ideologies? Really?

Trump then got ideological. He first targeted Cuba, calling it a “destabilizing regime”; even though Cuba has recently helped Colombia to end its decades-long civil war.

He also called Venezuela’s democratically elected government a “socialist dictatorship”, saying its people were “starving”. But while trying to score political points over Venezuela – an oil-rich nation which the US has long sought to manipulate by pushing large amounts of money into opposition hands, Trump essentially ignored the widespread famine across Africa that is also deeply rooted in political issues; a crisis that now threatens over 20 million people and which Oxfam has called the “largest hunger emergency in the world”.

Trump then went on to say:

From the Soviet Union to Cuba to Venezuela, wherever true socialism or communism has been adopted, it has delivered anguish and devastation and failure.

Apart from his inaccurate comparison of socialism and ‘communism’, Trump also failed to mention China; a nominally communist country which some forecast will overtake the US as the world’s biggest economy in the coming years. Perhaps Trump’s silence had something to do with his recent trade deal with Beijing?

A dangerous rant, not a speech…

Trump’s UN rant about the countries he didn’t like wasn’t surprising. But it was what he didn’t say that was most revealing – and dangerous. For example, there was no mention of:

Essentially, Trump revealed in his speech a belief in the sovereignty of countries that are US allies; and a belief in regime change in countries that are not US allies. He also showed that he is perfectly happy to exploit human rights abuses for his own political benefit, as long as it’s not America’s friends committing those abuses. It was not a speech about peace or human rights. It was Trump laying out his hypocritically aggressive politics for the whole world to see.