Just when you thought things could get no worse for the Lib Dems, they produce this excruciating video - Canary 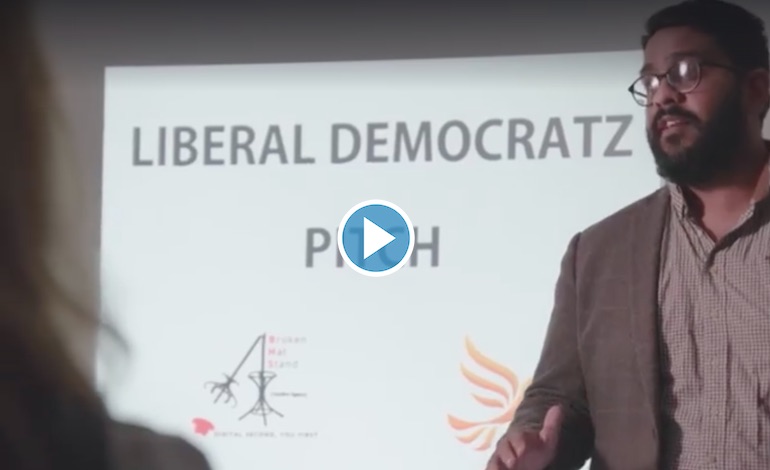 You can stop holding your breath. The Lib Dems have produced a new party political broadcast, due to hit Britain’s TV screens on 20 September. And a sneak preview from The Independent reveals it’s just as excruciatingly painful as the party’s previous efforts at producing promotional videos.

You may think that’s bad enough. People on social media clearly did. But then, The Independent posted the full party political broadcast on Facebook.

Released the same week as the first episode in the latest series of BBC mockumentary W1A, the Lib Dems’ video tries to send up creative agencies. But unfortunately, the party’s tone-deaf execution doesn’t quite work. In fact, if it succeeds at anything, it succeeds at sending up [0:54] its own party leader:

OK, um, he’s an economist… He’s the guy who warned about the financial crisis before it happened… He was the Business Secretary that massively increased the number of apprenticeships… He brought in a long-term industrial strategy… He set up the Green Investment Bank to support renewable energy… No?… He was on Strictly.

It’s not just a political party. This is like an anti-Brexit dance party. We’re social. Socially liberal. Liberally social. The party party. Guys, this is the ‘alt-middle’… Post-centrist. Radical and reasonable. RadiCable.

Having nailed the disdain with which many in Britain already view the Lib Dems, the video then drives [2:54] the point home:

The video’s first outing did not go down well on social media. At the time of writing, these were the top comments on Facebook: 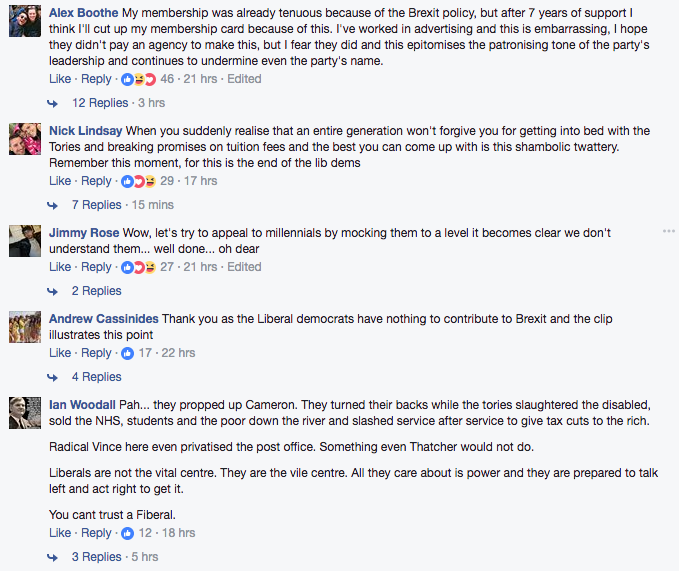 But while the party unabashedly tries to win the youth vote from Labour, there’s a problem. The Lib Dems seem unable to reflect on their own history of colluding with the Conservatives to inflict austerity on Britain.

Here’s a brief look at a few of the policies the Lib Dems enabled while in coalition with the Conservatives. They:

what created Jeremy Corbyn. Because if you spend five years demonising austerity [as] some sort of evil choice, then of course you can never digest ideas that sometimes you need [to] row back as a country in a way of living within the means of what you can afford.

Nick Clegg hasn’t learned the lessons of history. And after two parliamentary beatings, the Lib Dems haven’t learned either. They still don’t understand the damage their chosen doctrine, neoliberalism, has inflicted on the people of Britain. And poorly executed spoof videos will do nothing to help them.