Nigel Farage tweets possibly the worst video ever uploaded to the internet. And the response is priceless - Canary 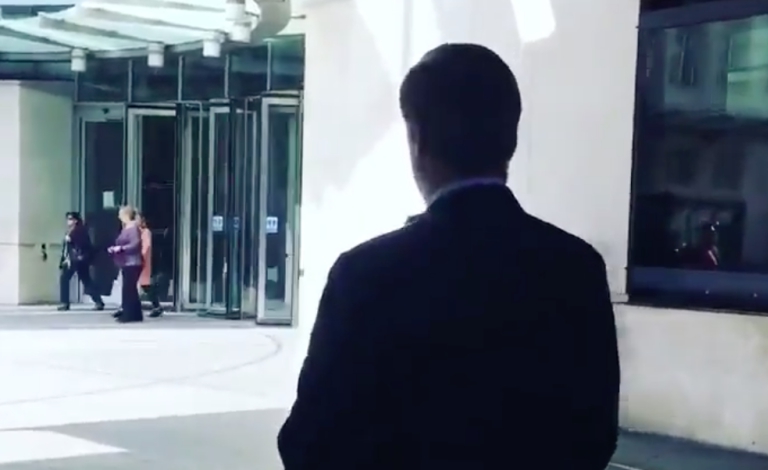 Nigel Farage has been ridiculed on social media after posting what is possibly the world’s most boring video to Twitter. The former UKIP leader posted a video of himself walking towards the BBC to deliver a complaint.

As he gets close to the door, Farage turns around. But there isn’t a punchline. He doesn’t say anything. He just shows the envelope to the camera. And it’s such a bad film that it’s impossible to see if there’s even a name on the envelope:

in tomorrow episode he will be collecting a parcel from the company he ordered it from. stay tuned

And pointed out that there are easier ways to deliver a letter:

Although some believe they found the reason why Farage is reluctant to use a stamp:

Do you hand deliver everything because there's too many immigrants at Royal Mail?

And these tweets summed up the general mood:

Farage’s complaint stems from the BBC’s coverage of the death of Arkadiusz Jozwik in August 2016. Farage claims [paywall] that the BBC incorrectly linked Jozwik’s death to the Brexit vote when journalist Daniel Sandford reported:

The fear is that this was a frenzied racist attack triggered by the Brexit referendum.

There was a 27% increase in hate crimes across England and Wales between July and September 2016. And in the days following the Brexit vote, the numbers of people reporting abuse was horrific.

But I mean, Nigel Farage, I mean, thank you for that, because you are part of this death, and you’ve got blood on your hands, thanks to you, thanks for all your decisions, wherever you are, er, yeah, it’s your call.

Writing in The Telegraph [paywall], Farage claimed that:

This single report, because it opened the floodgates to other media, has caused my family and me more misery than any other in my 25 years in politics. At the time, I couldn’t even go out to buy a newspaper without abuse being hurled at me. All of us lived in fear of a reprisal.

Farage does admit that the BBC made it clear that he denied the allegations. And although the subsequent trial did not link Jozwik’s death to hate crime, there were many incidents of hate crime immediately following the referendum.

Farage’s own role in the referendum campaign attracted criticism. His now infamous racist “breaking point” poster about refugees was even reported to the police for inciting racial hatred.

A report by the European Commission Against Racism also found that it was “no coincidence” that hate crime had risen after the Brexit vote. In particular, it singled out politicians like David Cameron and Nigel Farage for their use of language which “contributed needlessly to an increase in xenophobic sentiment”.

As The Canary has previously reported, there are lots of reasons to call out the BBC for bias. And the supposed public, impartial broadcaster does have a lot or questions to answer over its coverage. But interviewing the friend of someone who was killed is not one of these times.

And while abuse needs to be condemned, it’s also about time that Farage does acknowledge the repercussions of his xenophobic and racist attitudes.