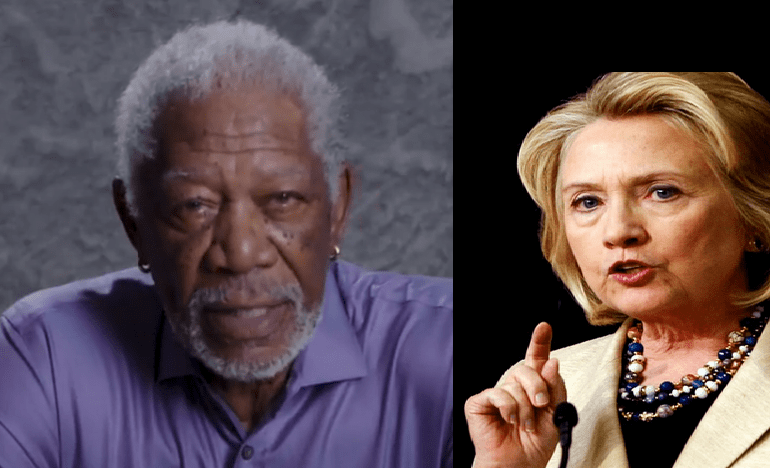 Fans have been left shell-shocked after Morgan Freeman tried to brainwash them for Hillary Clinton. The Hollywood icon starred in a straight-to-camera video urging viewers to “join the fight” against alleged Russian meddling in US politics.

In the two-minute clip for the Committee to Investigate Russia, Freeman declares that “we are at war” with the superpower. Since Donald Trump won the 2016 presidential election, the Clinton campaign and the US intelligence services have pushed the narrative that Russian hacking was responsible; not Clinton (a candidate that former US senator Mike Gravel called arrogant “beyond comprehension”).

During the presidential campaign, WikiLeaks released a huge bank of emails from the Democratic National Committee (DNC) server. The emails further damaged Clinton’s campaign, which was already badly wounded by her record in office. They showed Clinton championing fake public policy positions and the DNC establishment conspiring against Bernie Sanders’ rival candidacy.

The US intelligence community, along with the media, maintains that Russia hacked the DNC server. Former FBI director James Comey has expanded on this, claiming that Russia passed the emails to WikiLeaks through a proxy.

This accusation is the basis for Freeman’s video, which was first published on 18 September. The actor claims “we have been attacked” by Vladimir Putin’s Russia. But there is no evidence that Russia hacked the DNC server. In fact, there is counter-evidence suggesting the emails were leaked.

Morgan Freeman says we are at war with Russia, says "Join the fight." This is straight-up war propaganda. We's so fucked. pic.twitter.com/vMDCIphTk4

But Veteran Intelligence Professionals for Sanity (VIPS), a group of former leading intelligence officials, have produced independent forensic analysis. And this suggests that the emails were leaked, not hacked:

Key among the findings of the independent forensic investigations is the conclusion that the DNC data was copied onto a storage device at a speed that far exceeds an Internet capability for a remote hack. Of equal importance, the forensics show that the copying and doctoring were performed on the East coast of the U.S. Thus far, mainstream media have ignored the findings of these independent studies…

VIPS members Ray McGovern, a former CIA analyst, and William Binney, who was a high-ranking NSA official for 30 years, have insisted since last year that the signs point to a leak. The position of VIPS chimes with what WikiLeaks editor Julian Assange has said about the emails. Assange has long insisted that the emails were leaked; and that the Russian hacking story was to distract from their content.

Freeman has shocked fans who did not expect such outright propaganda from the star of Bruce Almighty and The Shawshank Redemption.

This is absolutely a call to arms against Russia by a threatened elite! Shame on Morgan Freeman for being a usefule attack dog

In the video, Freeman claims that Putin has “set his sights” on his “sworn enemy” – the US. But financial activist and broadcaster Max Keiser called the clip “embarrassing”:

.@BarackObama should address nation; put #RussiaGate hoax to bed, so that knuckleheads like Morgan Freeman can stop embarrassing themselves.

Freeman has form in producing content for the Clinton machine. Last year, the renowned actor narrated three campaign videos for the presidential candidate. Here’s one example:

In the ad, the actor claims Clinton has long been a champion of minority rights. For Freeman, it seems to be no matter that Clinton was branding young black men “super predators” only 20 years ago. To continue scapegoating black people, the US establishment replaced the n-word with super predator after the former became taboo.

Colonialism, the slave trade, and rampant interference in foreign elections are actually shining examples of the US acting much less than democratic. People were incredulous at Freeman’s claim:

How can Morgan Freeman, a black man, say with a straight face the US has been a shining democracy for 241 years?

We must be clear. The video is no less than dangerous war propaganda from Freeman – a much-loved public figure. Former vice president Dick Cheney has already said that alleged Russian interference may amount to an “act of war”. And after Iraq, we cannot let the establishment frogmarch us into another military conflict based on dodgy evidence. Freeman deserves to lose respect for starring in war propaganda. And by the looks of things, he has.