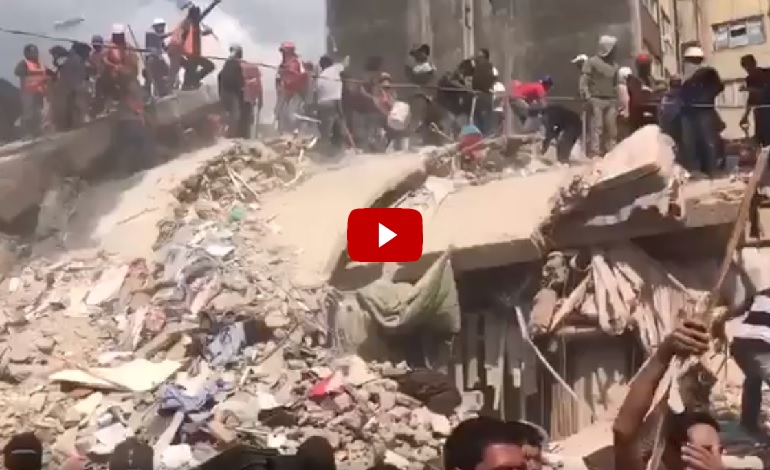 On 19 September, a 7.1 magnitude earthquake hit Mexico City and surrounding states, killing at least 230 people. The event sparked both chaos and solidarity with the people and areas most affected.

Several witnesses in Mexico City told The Canary what they saw as the earthquake hit. Those who work in office buildings described windows cracking, as if they’d had rocks thrown at them, while everything around them fell to the floor. Others explained how it was difficult to remain standing. And those who managed to get out into the streets described seeing both the ground and the cables above their heads moving as they waited for the earthquake to end.

After the earthquake had stopped, witnesses spoke of visible cracks in walls, heavy traffic, and people fleeing from buildings. The fear and shock both during and after the event were palpable.

But in other places, the situation was much worse. Buildings had collapsed – some with people still inside.

One of the buildings that collapsed, killing dozens of people, was the preschool part of a private school [Spanish] in the south of Mexico City.

Another video, meanwhile, captured the explosion of a building after the earthquake:

The earthquake happened exactly 32 years after another devastating earthquake destroyed 100,000 houses and killed thousands of people. And there had even been a yearly drill earlier in the day, which commemorates the 1985 disaster.

But there was not only shock, chaos and destruction in Mexico City and surrounding states after the earthquake struck on 19 September 2017. There were also many citizens who quickly volunteered to help those affected:

Article updated at 02:00 (BST) on 21 September to reflect the latest death toll.