The EDL give up after just six people arrive for their march. And even Argos is taking the piss [TWEETS] - Canary 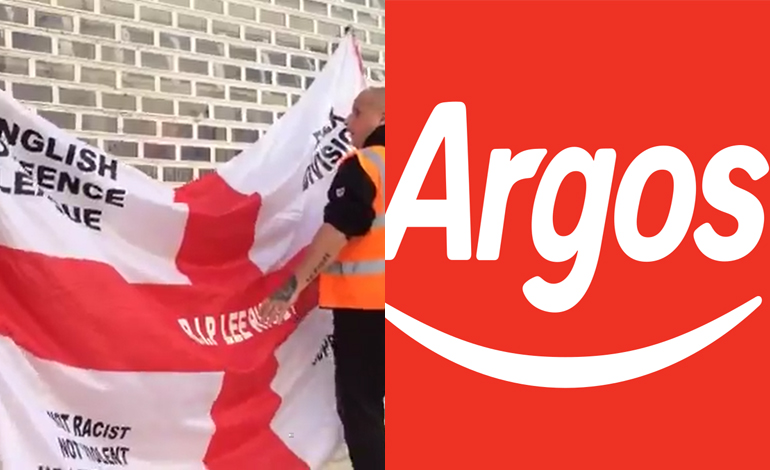 On 23 September, the English Defence League (EDL) descended on Chelmsford, Essex. The far-right protest group intended to highlight alleged rises in child grooming, female genital mutilation and terrorism suspects. But they went home after just half an hour as only six people arrived.

The march, billed as a ‘regional demonstration’, should have begun at 1pm. One EDL member was caught struggling to open a banner reading “Not Racist, Not Violent, No Longer Silent” at the rally’s meeting point:

The first of demonstrators from the English Defence League have arrived in Chelmsford for a planned march. pic.twitter.com/juqZ3KQSzX

The group was met by counter-protesters including Stand Up to Racism and Unite Against Fascism. And faced by a crowd of opposition as well as a heavy police presence, the EDL called it a day.

More embarrassingly, after Twitter users said the EDL meeting point is a now-closed Argos store, even the high street shop had fun at the EDL’s expense:

They'll have to order online like normal people then ~ Alyson

There has been no public comment about this failed event by the EDL. The Essex Division Facebook page has continued posting links without mention of the event.

One down, many to go

Hope Not Hate call the EDL “increasingly irrelevant”. And the Chelmsford event seems to confirm this. And in July 2017, only 50 EDL turned up for a rally in London, which the EDL itself described as an embarrassment.

But the EDL’s death doesn’t mean the fight against racism in the UK is over. More extreme street organisations are filling the void. The recent arrest and charging of British soldiers for participation in banned fascist group National Action is a reminder of this. Meanwhile, the mainstream political environment is increasingly hostile to migrants and other minorities.

Facing fascists on the street is an important part of fighting far-right ideology. But we must also continue fighting them in offices of power too.

– Read more in The Canary about racism and its impact.