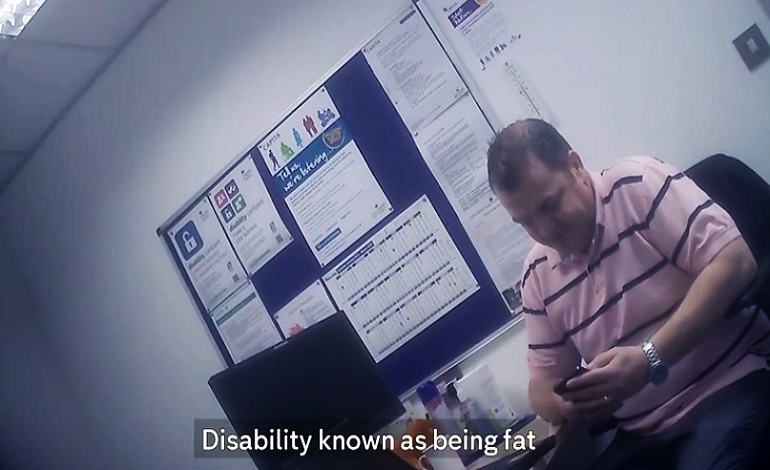 A paramedic turned Department for Work and Pensions (DWP) fit-for-work assessor has been allowed to continue practicing after a professional conduct hearing.

Alan Barham was hauled before the Health and Care Professions Tribunal Service (HCPTS) between 18-21 September. The hearing came after he was filmed saying about claimant’s disability, “She asks for help to wipe her arse because she’s too fucking fat to do it herself”, amongst other things. But the HCPTS has just let him off, essentially, with a caution.

“Too fucking fat” to get benefits

Barham, who conducted assessments for Capita on behalf of the DWP, was secretly filmed by Channel 4’s Dispatches The Great Benefits Row programme. Broadcast on 11 April 2016, the HCPTS said [cached] Barham was caught saying about one claimant’s Personal Independence Payment (PIP) assessment:

I’d literally finished his assessment before I’d even walked through the door. I’d done it on Saturday…

Most of it’s informal obs you catch them out on… They’re informal, that’s why you don’t have to say anything. They’ll tell you everything that they want to tell you, is wrong, you can completely dismiss it more often than not. You’ll get your whole assessment done with watching what they do…

And he said of one disabled claimant in particular:

Barham told the panel that at the time he was filmed by Dispatches, he had become arrogant and big-headed. He had been lauded by Capita for the high percentage of excellent reports he produced and was well paid… [allowing] all this to ‘go to his head’.

Barham claimed on the programme he earned £20,000 a month. This was because, he said, Capita paid him £80-£300 per assessment. And therefore, Barham said, he was “flying through” people’s assessments because of this. i News also reported that Barham claimed:

he [was] being ‘scapegoated’ by the outsourcing company and that filling in PIP forms before assessment, known as ‘pre-population’, is standard practice. He insists he was only following instructions and guidelines laid down by Capita.

Capita said of Barham at the time:

We are obviously appalled by and sincerely apologise for this individual’s disrespectful comments and actions… [He] will no longer work for Capita.

He was subsequently sacked. The DWP said in a statement:

The assessment process of PIP has been extensively reviewed to ensure it is robust, the claims process is as straightforward as possible, and decisions are made based on the evidence.

But the impact of Barham’s decisions on those less well off than himself was massive. As The Northampton Chronicle reported, Barham was responsible for a woman with severe mobility and communication issues, who had a brain tumor when she was 11, being refused PIP. And another woman, who lives with retrograde amnesia after being hit over the head with a metal pole, was also refused PIP due to Barham’s assessment.

The HCPTS panel said that Barham’s comments made him look like he was:

holding the view that many claimants were liars, which was totally at odds with an independent assessment process into whether a claim was valid or not.

It found him guilty of misconduct and issued him with a caution order, meaning he can still work as a medical professional. The HCPTS has the power [pdf p8] to stop people working in their trained profession altogether but chose not to do this in Barham’s case.

But Barham is not the first assessor mired in controversy. As The Canary documented, a scandal erupted after it was revealed that fit-for-work assessors had been asking people ‘why haven’t they killed themselves yet?’. And there have been numerous other reports of assessors lying about claimants. So, Barham’s conduct could well be the tip of the iceberg. But the case ultimately poses the question as to whether fit-for-work assessments are really fit-for-purpose.