Even pro-Conservative mainstream media outlets now feel forced to report on Tory Brexit incompetence. The party is disintegrating, and Theresa May’s big speech in Florence on 22 September was a damp squib, at best.

Firstly, major EU representatives snubbed the PM and chose not to even attend. The speech then proved weak and wishy-washy. Rather than providing clarity or bringing the two sides of her party together, it seems only to have made matters worse.

Regardless of their internal chaos, the Conservatives can usually rely on sympathetic coverage from the UK media. Most newspaper owners in the UK have vested interests in supporting the Tories. Yet the in-fighting and ineptitude displayed before, during, and after the Brexit vote has slowly alienated the Conservatives’ staunchest Fleet Street supporters.

The Telegraph, nicknamed ‘The Torygraph’ by some, is owned by Sir David and Sir Frederick Barclay, whose combined wealth is estimated at £7.2bn. They live in tax-exile in Monaco, and their newspaper has been described as one that:

utilizes loaded words (wording that attempts to influence an audience by using appeal to emotion or stereotypes) to favor conservative causes.

Despite that, their 25 September front page is damning. It describes Foreign Secretary Boris Johnson as “simple minded”, and the ongoing rift as a “cabinet battle” that is intensifying. 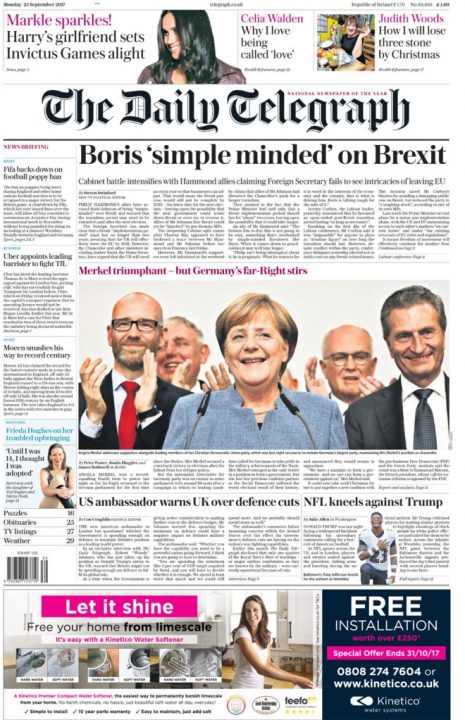 The Metro is a free newspaper owned by DMG Media, the same news group that distributes The Daily Mail. The company is owned by near-billionaire Viscount Rothermere. Its pro-Tory bias is apparent on a daily basis; but like The Telegraph, its loyalty has apparently diminished following the events of the last few days.

The Metro describes the Conservative cabinet as being in “revolt” with as many as 50 Tory MPs plotting to oust the Prime Minister. It reports that May is “struggling” and even “failing”. 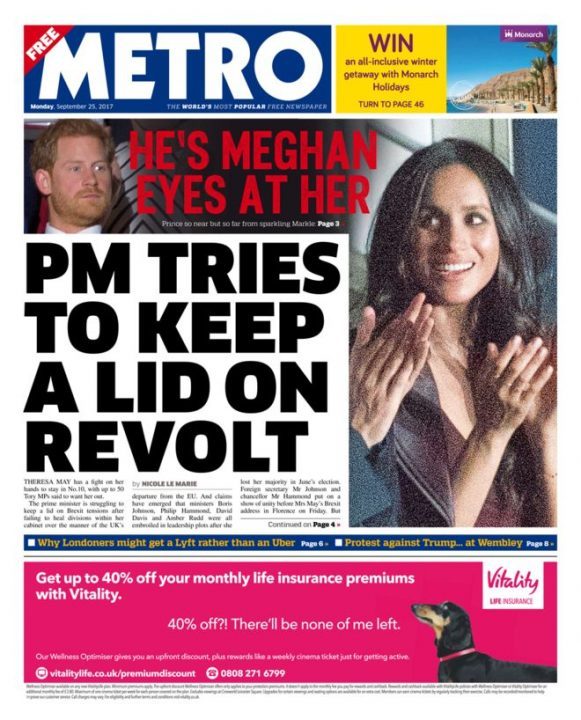 The i, which is now owned by Johnston Publishing but retains close editorial links with the George Osborne-edited Evening Standard, suggests an imminent Tory leadership challenge. It reports that Brexit Secretary David Davis is intending to oust his leader soon: 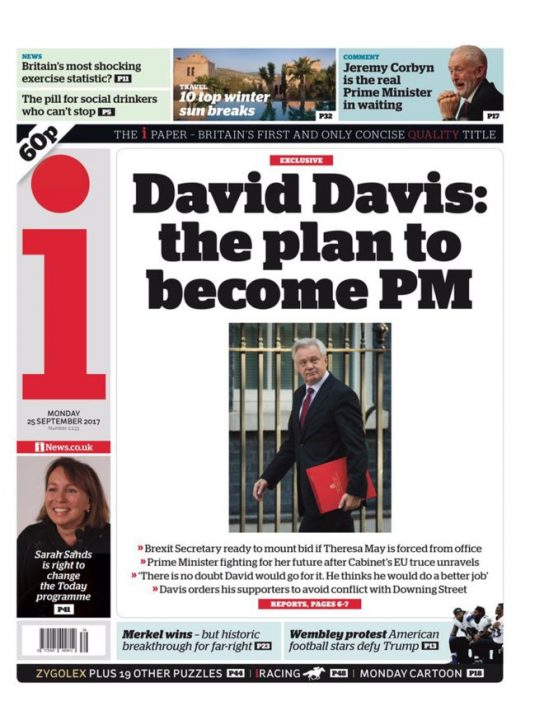 A wound they cannot heal

The Conservative divide over Europe goes back well over a century. And history has proven it is capable of splitting the party completely.

Cameron introduced Brexit. Now May is trying to push it through. But as traditional friends in the mainstream media turn their backs, and with Labour’s momentum still building, it could well be that Brexit is the blunder that will destroy the Tories.