On the first day of the Labour conference, a group of members claim the party has 'kept them out' [IMAGES] - Canary Workers’ Co-op 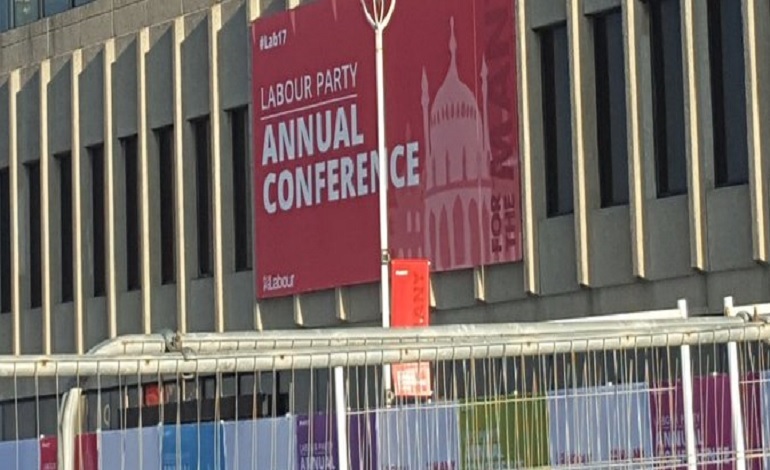 As the Labour conference gets fully underway, a group of members is claiming that the party has “kept them out” at every level of democracy. And so, they’re on the ground in Brighton campaigning to make sure their voices are heard. But also to ensure the party isn’t actually breaking the law in the process.

The “Party Participation and Disabled People” (PPDP) campaign has been launched by a group of disabled members who say they’re “frustrated” that disabled people are still being “kept out of meetings, events and campaigns”. The group has printed 5,000 leaflets to be handed out at the conference. It aims to try and get the party to improve its obligations under the Equality Act 2010. And The Canary caught up with some of the organisers, to find out why they’re taking direct action.

PPDP has been handing out leaflets, putting them on brochure racks and leaving them on seats at conference events: 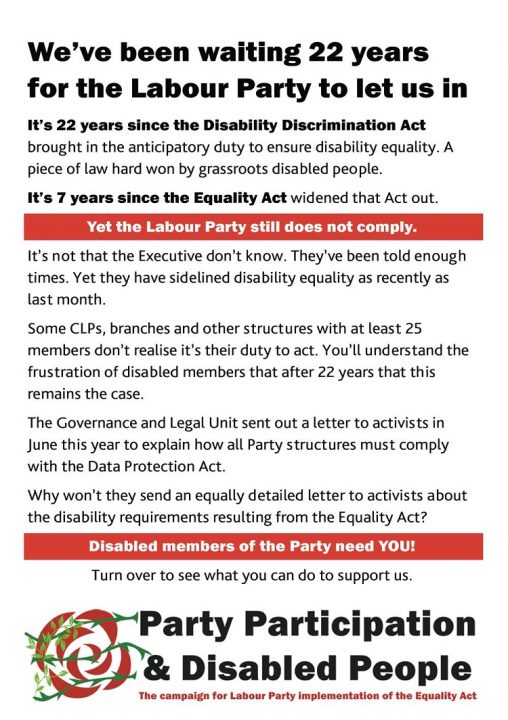 Fran Diamond from Vauxhall said that the campaign was to raise “the profile of all disabled people with the Labour Party to ensure they have full and equal access at ward, constituency, regional & national level”. She said that:

PPDP want each Constituency Labour Party (CLP) to have a Disability Officer (DO) who is supported to enable all disabled members to participate in meetings & events. Also, we want to ensure there is a DO in every region to help ensure compliance with the Equality Act. We want to enable more disabled people to be CLP Officers, local councillors and MPs.

Currently, the Labour Party has two disabled MPs – Marsha de Cordova in Battersea and Jared O’Mara in Sheffield Hallam. And while the party does not publish figures on how many disabled councillors it has, a report puts the total across England for every party at [pdf] 13.2%. in 2013. Whereas 20% of the population are disabled people.

Sophie Talbot, from Islington South and Finsbury, also told The Canary that PPDP campaign is not just about representation. It is also about the party’s compliance with the Equality Act 2010. She said:

There’s a block to this at General Secretary and Compliance levels. No information is being given to branches, CLP and other structures about what they need to do to. We started the campaign through sheer frustration at being kept out of meetings, events and campaigns.

For example, the act outlines [pdf p13] that:

If you are a disabled person and are a member, associate member or guest (or a prospective member or guest), [a] political party must make reasonable adjustments in its joining processes and in how you access its services.

And it’s this part of the act which Talbot says the party needs to take action on.

The Labour machinery vs Corbyn

Originally PPDP raised the issue with John Stolliday, who is responsible for compliance issues at Labour HQ. But Talbot said Stolliday then bounced the issue to Labour’s General Secretary Iain McNicol. And he told PPDP that “if you have any evidence of specific breaches of the DDA [Disability Discrimination Act] we will, of course, look into them on a case by case basis.” But Talbot was unimpressed. She said:

He doesn’t even know the DDA was replaced by the Equality Act, and he isn’t aware the legal duty is anticipatory – act first ask questions later. No wonder branches and CLP are so far behind in implementing the Equality Act. We have argued this is a legal compliance issue, not a policy issue, and that a change needs to happen now.

But Talbot was positive about what the future could hold:

We want party members to take up the gauntlet we’re throwing down in these leaflets. Push for your branch, your CLP and your region to comply with the Equality Act now. We have the best manifesto we could hope for and Jeremy Corbyn and John McDonnell are incredible advocates for disability rights but they are stymied by party machinery.

The PPDP campaign comes as the UN has now reported four times in the space of a year on disabled people’s human rights violations by the Conservative government. The Chair of the UN Committee on the Rights of Persons with Disabilities (UNCRPD), Theresia Degener, said that the government had created a “human catastrophe” for disabled people in the UK. So, the PPDP campaign is needed more than ever. And the Labour Party would do well to listen to it.

The Canary asked the Labour Press Team for comment, but none was received at the time of publication.