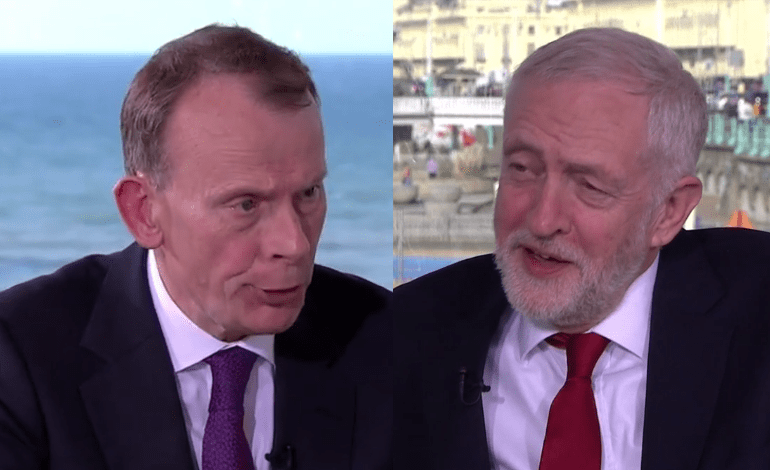 Kicking off the interview, Marr asked whether Corbyn had become “over-optimistic” about Labour’s electoral prospects. He continued:

You didn’t win the election. What happened in the election was you got lots and lots of younger, university-educated, more metropolitan voters and you got a lot of anti-Brexit or remain supporting voters.

Actually, Labour’s support increased across the board in the general election. So, rounding off his response, Corbyn wasn’t having it:

I have to say, every commentator wrote us off in April… and in June they were eating their words.

But not before setting the record straight:

Our vote went up actually in all sections of the community by differing amounts. But our vote did go up to nearly 13 million.

That commentators wrote Corbyn off may be an understatement. Under two months before the general election, The Telegraph reported:

Experts have predicted big gains for both the Conservatives and LibDems at May’s elections with Labour possibly in line to suffer losses of up to 50 seats.

Then the Corbyn-led movement went and increased Labour’s vote share by more than at any point since WWII. There was an unprecedented swing in the polls.

Students do overwhelmingly back Corbyn

Marr is right to emphasise that Corbyn has made huge gains in universities. Student support for Labour leapt to 55% under Corbyn, according to research from the Higher Education Policy Institute (Hepi) and YouthSight. This is a massive increase. Towards the end of Ed Miliband’s leadership in 2015, student support for Labour sat at 35%. Under Tony Blair in 2005, only 23% backed Labour.

It’s also true that Labour led the Conservatives by 54% to 26% among Remainers in the 2o17 general election, according to Ipsos Mori. But as Corbyn pointed out, Marr is wrong to marginalise Labour’s support to only these sectors. Labour increased its vote share in all communities, while the clearest divide between Conservative and Labour voters is age and education. If a person is younger and well-educated, they are much more likely to back Labour.

Later in the interview, Corbyn did not hold back challenging Marr’s fundamental economic assumptions. Marr was voicing the false dichotomy of tax and spending. He suggested that government spending always leads to tax rises:

Wherever we look you’re spending more money, and yet the tax raises you’ve talked about so far are pretty modest…

But Corbyn busted the myth that a government needs higher taxes to spend more money:

The whole point of investment is that it brings future profits. For every pound spent on flood defences, for example, the taxpayer saves eight in later economic damage.

There are many ways investment powers the economy at large. Investment in social housing stops citizens paying extortionate rents to landlords. Such extortionate rent concentrates money in the hands of the few who own assets to rent. Whereas, if citizens didn’t pay out nearly half their income in rent, they would have much more money to spend in local businesses. This would increase demand for products, powering the economy.

It appears support for investment and a change in economic thinking is growing. Labour has been ahead in nearly every poll since the general election. Contrary to Marr’s assertions, support for the Corbyn-led movement is growing across the board. As long as people keep up the pressure and continue to discuss the issues with families and friends, the revolution is pending.