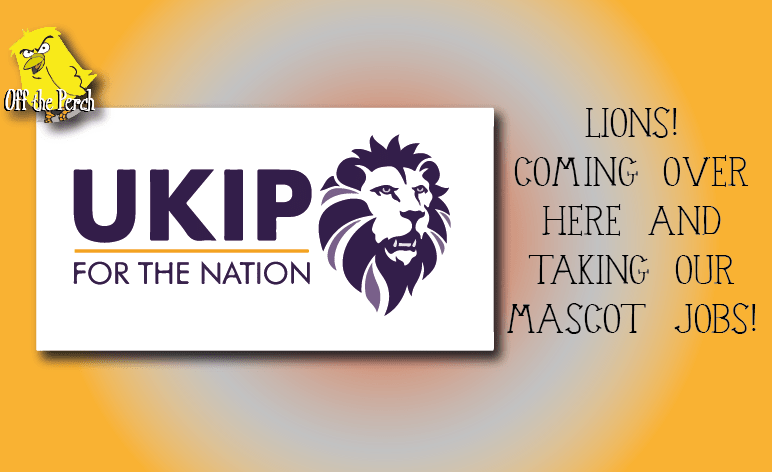 Until someone noticed that the new mascot is actually an African national.

The animal in question is a lion. An animal that’s famously not native to the British Isles.

According to one inside source:

Look, we thought it was just a really big cat – okay? Anyone could have made that mistake. Anyone!

Obviously this looks bad, but we’ll move past it. We just need a native animal that fits in with our brand identity. Like a weasel. Or a rat. Or a manky old crow you see scavenging from dead animals at the side of the road.

This particular lion was none other than Simba DeLionking – an actor who was a huge star in the 90s.

Off The Perch caught up with Simba to find out what happened:

I did not know who these UKIP people were when I took the job. When they found out I was from Africa, they fired me.

They also accused me of trying to trick them! I said if you’re upset to discover that lions aren’t British, just wait till you discover where St George came from! And Jesus! And your alphabet! Your number system too! And your ties – your automobiles – your vodka! The list is endless!

The point being that if UKIP wants an exclusively British culture, it really needs to pull its finger out!

Of course, this isn’t the biggest embarrassment UKIP members faced on 29 September. They’re also announcing their new leader. And although we don’t know who it is yet, it’s an all-embarrassment shortlist.