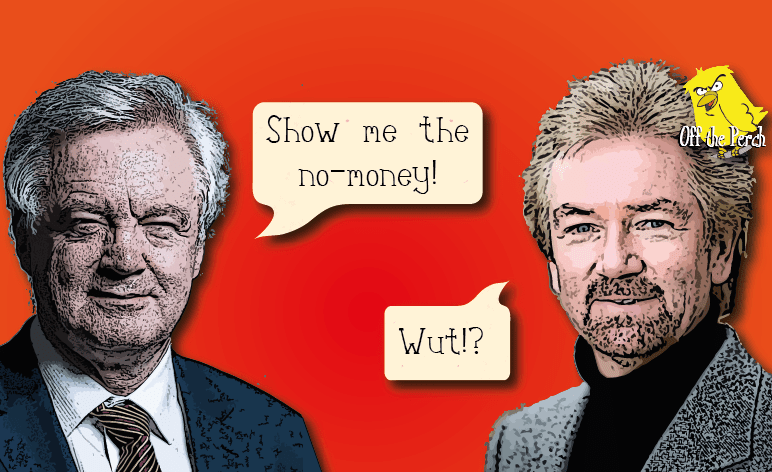 Before the Brexit referendum, we were promised a good deal. Afterwards, we were told we’d probably get something and that deal meant deal. Now, they say we probably won’t get anything. But that’s okay, because our failure will teach those crafty European swine a lesson.

At least I think that’s it?

I forget what the ‘logic’ is.

But anyway – the Brexit team has warmed up for the inevitable fiasco with an appearance on Noel Edmonds’ Deal or No Deal.

Appearing on the show was David ‘Dave’ Davis. Edmonds introduced the prominent Tory Brexiteer and explained how the game works.

“Tosh”, Davis said – dismissively waving his hand and smirking. “Why would I go for a deal when it’s so much easier to get no deal?”

“Well actually, and although I pretend otherwise, the game is in fact completely random”, Edmonds admitted sheepishly, as he gently thumbed one of his many healing crystals.

Davis looked panicked at this point. How was he supposed to demonstrate the glory of getting no deal when there was a 50% chance he’d come out on top?

Davis didn’t get where he is today without the wily cunning of a rat, however. And as such, he had a backup plan.

“NO DEAL!” he shouted, as he beat himself in the face with his own shoe. “NO DEAL! NO DEAL!”

“My god”, Edmonds muttered to himself, as he witnessed the self-inflicted glory. “It’s beautiful.”

If you’re worried we could accidentally get a deal out of Brexit, don’t be. Because the government has plucked a few billion out of the magic money tree and founded the Ministry of Failure – a department that’s been working tirelessly to ensure that Brexit means catastrophe.

We asked a member of the Brexit team if this Ministry of Failure was undermining the work they’ve been doing: