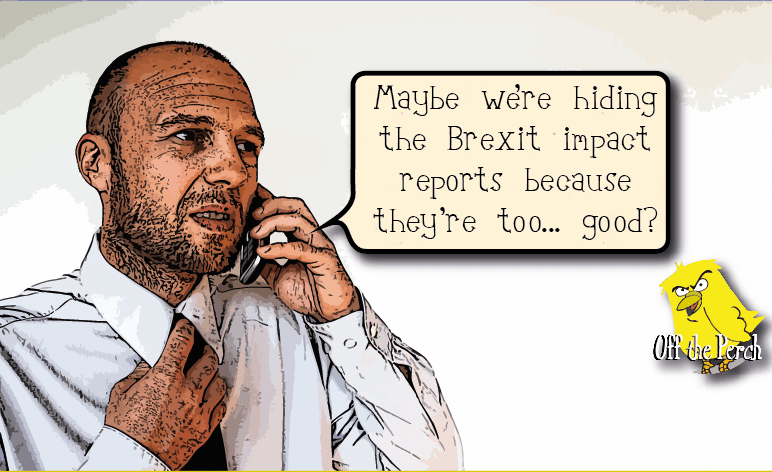 The government is refusing to publish multiple studies into the impact of Brexit. Some have claimed it’s because the expected impacts are so terrifying that reading them would be like staring into the Ark of the Covenant.

But is that really the case?

Off The Perch caught up with a Brexit minister to find out more.

The minister told us:

The impacts we’re expecting are so good that it’s impossible to read them without becoming terminally excited. It’s like the Monty Python sketch about the joke that’s so funny it kills you. And as such, the reports have been deemed a public safety risk.

We asked for an idea of what some of these impacts might be. We were told:

Well, I can probably give you a hint. Like… erm… we’ll be getting really straight bananas again. Or is it bendy bananas we want? Whichever is more patriotic anyway. That’s what we’ll be getting.

We’re also expecting… you know… trade… There’ll be some of that. Loads, probably. People will be queuing up to buy all of that… stuff… we manufacture.

And let’s not forget the NHS. Oh no, sorry – what I meant to say was let’s forget about the NHS. Although I’m not supposed to say that out loud am I – we’re just supposed to stop talking about it and hope nobody remembers.

If you think the release of these documents could help reverse Brexit, you might be being a tad optimistic. Because they probably don’t contain anything worse than what we already know.