Noam Chomsky wades in on the biggest ‘f*ck off’ given to the government. It's an eye-opener. - Canary 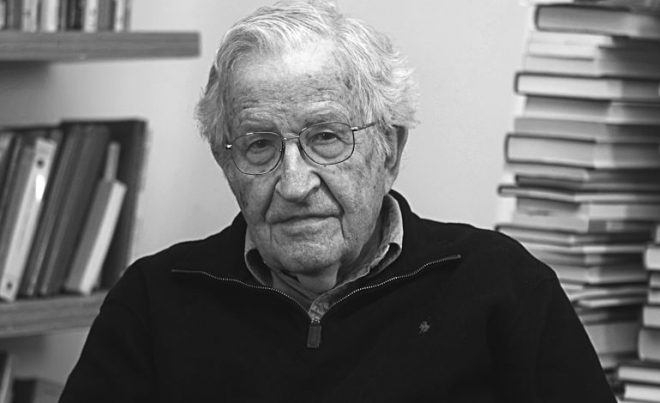 Political thinker Noam Chomsky wades in with his opinion on Brexit. Brexit, which one person describes as a “fuck off” to the government, is often the subject of debate. But there is now a whole documentary on it, where Chomsky joins Brits all over the country in explaining the vote to leave the EU. It came out on 24 October, but The Canary got an advance viewing.

Brexitannia, directed by Australian film maker Timothy​ ​George​ ​Kelly​, is a feature-length documentary in two parts. Shooting in black and white, Kelly travels across the country to interview scores of Leavers and Remainers.

The film’s first part is on ‘The People’. The interviews provide a real cross-section of those who voted in the European referendum. Kelly said in a statement about the film, seen by The Canary:

The film’s second part is on ‘The Experts’. Chomsky is joined by others, including Saskia Sassen, Guy Standing, Nick Srnicek, Heidi Mirza, and Federico Campagna, to give their take on the biggest vote in recent British history.

Hearing it from the people

The film starts off with people explaining why they voted for Britain to either leave or remain in the EU. Some of their answers are no shock. The feeling that the vote to leave was about anti-immigration, a common reflection at the time of the vote, does emerge in the film. But it becomes clear that this was far from the only reason.

For instance, people saw senseless policies play out in their everyday lives and perceived that they came from the EU. Surprisingly, even cucumbers had a role to play in people’s decision-making. As did nuisance farming and fishing rules.

What’s more, there was a sense that the relationship between Britain and the EU just wasn’t working anymore. And the vote for some wasn’t just about Britons taking control back from the EU, it was also a rebellious move against the politicians. As one of the subjects says in the film:

The view from the experts

In the run-up to the EU referendum vote, Michael Gove MP, a Leave campaigner, said [paywall] that:

The people of this country have had enough of experts.

But in the film, Chomsky sheds some light on why Gove might have said that:

When you’ve lost democratic control, you can blame it on the experts. But it’s not the experts that created the policies, that’s basically the business world and the corporate sector.

Then, Standing and Srnicek suggest that it’s actually neoliberalism that isn’t working; and that Brexit was a reaction against that.

What’s wrong with neoliberal democracy is… first of all that it undermines democracy. That’s explicit when you introduce privatisation, marketisation and so on. That’s taking decisions away from people and placing them in the hands of private power. That in itself is anti-democratic.

Brexitannia pretty well sums up why Brexit happened. It’s shot as a simple concept, but Kelly builds his argument with fantastic cuts, stunning cinematography, and a running time of around 1 hour and 20 minutes. That overall makes it an easy watch. While it confirms some suspicions, there are some surprising, eye-opening truths. And it’s comforting to hear most of it come from the people – both Leavers and Remainers – who voted themselves, as well as the experts.

– Find out where the film is showing in a cinema near you.