Antiquated rapscallion from a bygone era meets children at Downing Street. And so did Paddington Bear. - Canary 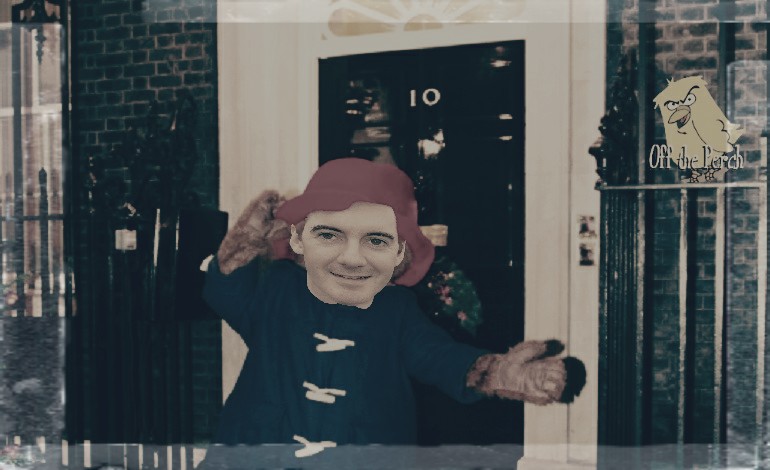 On Monday 11 December, Downing Street hosted its annual children’s Christmas party. And joining the Prime Minister alongside the wide-eyed kiddies was a very special guest – a well known rapscallion cartoon figure from a bygone era.

And Paddington Bear turned up as well.

‘Moggington Bear’ braved the UK’s icy winter blast to put in a special appearance at Number 10. Wrapped up tightly in his signature 1860s attire – a blue dress-coat and white vest, lavender striped pantaloons, coordinated gloves, top hat and walking cane – Moggington polonaised through London’s most famous front door, much to the excitement of the children. And Theresa May.

The PM had organised Moggington’s visit to coincide with the government’s latest White Paper on child poverty. Called Well Bless Ma Sowl! Moving Poverty-Stricken Children into East-End Chimney Sweeping or Workhouses, the government is hoping it will inspire the four million deprived children in the UK to be less of a burden on the taxpayer. Using Victorian-era methods, it aims to find them gainful employment or philanthropic support, to ease the constraints on the education budget.

Moggington Bear had a splendid time with the children. He dutifully rolled out some of his much-loved parlour games, including ‘Are You There, Thatcher?’, ‘Disabled Scrounger’s Bluff’, and the favourite of a former PM – ‘Squeak, Piggy, Squeak’. Caution prevailed among the children, however, when they realised they weren’t sitting on the real Santa Claus’s knee to receive their gift-wrapped lumps of coal, but a somewhat inebriated Ken Clarke.

But suddenly, uproar swept across the assembled party-goers as Moggington noticed the presence of Paddington Bear.

Bellowing “IMMIGRANT FIEND!” at the top of his voice, the Victorian dandy lurched at the bear, who is reportedly from “darkest Peru” but living in a House in Multiple Occupation (HMO) with nine Lithuanian sausage factory workers in Thornton Heath, South London.

Moggington attempted to make a citizen’s arrest of Paddington, accusing the bear of residing in the UK on an expired student visa. The children, looking visibly shaken by the presence of this foreigner who The Daily Mail claimed was deported to the UK from Lima after being convicted of illegal marmalade smuggling, hid behind Foreign Secretary Boris Johnson. One Downing Street insider told Off The Perch that Johnson had to be reminded by Andrea Leadsom that people from South America aren’t “piccaninnies”.

Marmalade sandwiches all round

But just as quickly as the scuffle began, it ended. Armed security from G4S quickly arrived, removing Paddington in a head lock and bundling him on the first charter flight back to Lima. The bear reportedly managed to release one tweet before having his phone confiscated: 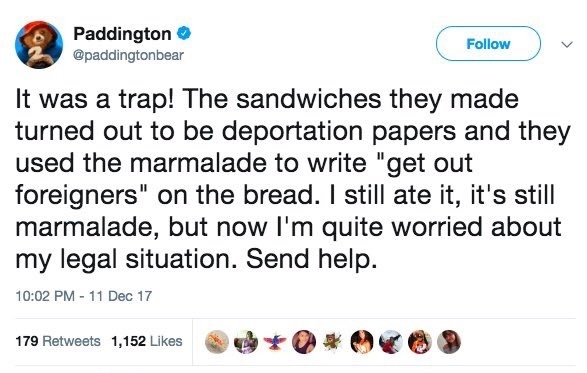 And so, with the party over and the children (and Ken Clarke) content, Moggington Bear made his way back to darkest Somerset feeling rather pleased with himself. His next adventure? Opening a food bank in Weston-super-Mare.

A very Merry Christmas to one and all!