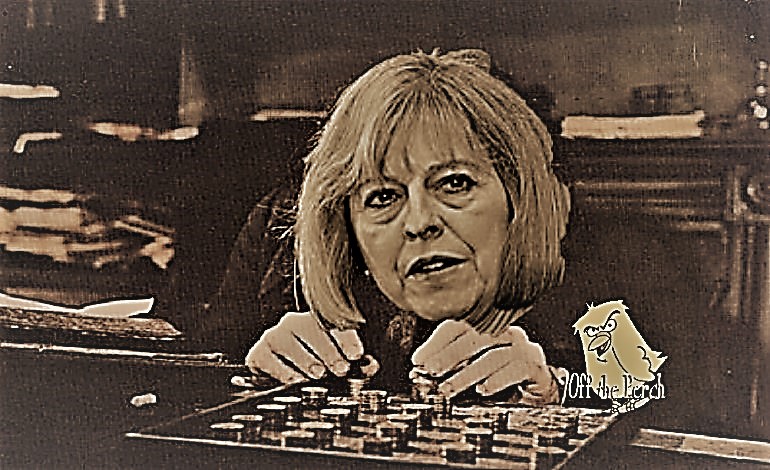 Thatcher was dead: to begin with. There’s no doubt about that.

She was as dead as a dodo. Mind! I don’t mean to say that I know what is overly dead about a dodo. I regard Priti Patel’s career as the deadest example of an extinct species there is.

Margaret Thatcher and Ebetheresa Scrooge were ideological bedfellows, once. The thinking was known as neoliberalism. Sometimes people called neoliberalism ‘capitalism’, and sometimes ‘corporatism’, but it answered to both names. It was all the same to the Tories.

Oh! But she was a tightfisted hand at Number 10, Scrooge! A squeezing, wrenching, grasping, scraping, covetous old sinner!

One dark winter’s evening, Scrooge was sitting in her expenses-fiddling office. It was biting, air-polluted-due-to-lack-of-action-on-climate-change, weather. “A merry Christmas, aunty! Jeremy Corbyn save you!” cried a cheerful voice. It was Scrooge’s nephew.

“Christmas and austerity?” uttered Scrooge’s nephew in disbelief. “You don’t mean that, I am sure?”

“I do,” said Scrooge indignantly. “If I could work my will, every idiot who goes about with Mariah Carey’s All I Want For Christmas on his lips should be boiled in his own Pot Noodle! He should!”

“Nephew!” returned the aunty sternly, “keep Christmas in your own way, and let me keep it in mine.”

When Scrooge’s nephew left, two campaigners from the People’s Assembly came in to collect Bitcoins for the working poor.

“Bitcoins?” Scrooge asked sarcastically. “Are there no Jobcentres? No food banks? Go on! Get along with you!”

After G4S security threw the campaigners into the icy night, Scrooge turned to her newest aide, Toby “Toadmeister” Young.

“You want Christmas Day off, don’t you?” asked Scrooge.

“If that is okay, ma’am,” answered Young.

“No, it’s not,” said Scrooge. “After all, the damn EU makes me pay you for the day, although you don’t work. But we’ll fix that once we scrap the Working Time Directive. Come in early Boxing Day.”

Young promised he would, and the two went home. Scrooge lived in a £800,000 townhouse in Fitzrovia. As she approached her front door, she thought she saw Thatcher’s face in the knocker. But she concluded it must have been the swift Laphroaig she’d knocked back in the Strangers’ Bar earlier.

Once inside, Scrooge heard a noise from her wine cellar. It came nearer and Scrooge saw a ghost. Lo! It was Thatcher’s ghost, and her chains were long; made of credit cards, privatisation contracts and sold-off council houses.

“Who the fuck are you?” said Scrooge.

“In life, I was your ideological bedfellow, Margaret Thatcher”…

Part Two of ‘A Brexmas Carol’ out on Wednesday 20 December.