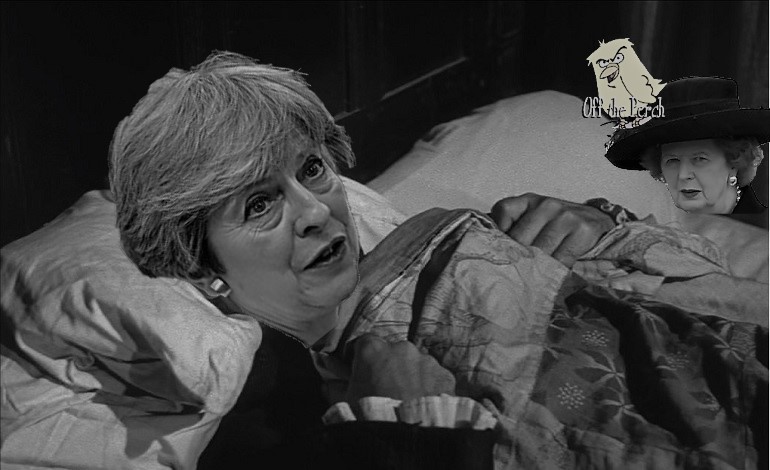 We pick up, dear reader, where we left off: Ebetheresa Scrooge was mid-visitation from the ghost of Margaret Thatcher: in chains of credit cards, privatisation contracts and sold-off council houses…

“Oh, I know, dearest Maggie”, replied Scrooge. “That was your finest hour!”

“Then why are you fettered thus?” asked a trembling Scrooge.

“I wear the chain I forged in life,” replied Thatcher. “I made it link by link, and yard by yard; I girded it on of my own free will (with some help from the free markets), and of my own free will I wear it. I must now wander the Earth in death forever shackled by the burden of sin I meted out in life!”

“But… But…! Right to Buy? NHS reform? Your policies were revolutionary!” proclaimed a bemused Scrooge.

“I only cared about business. But not about the people around me,” mused Thatcher. “Now, I am here to warn you, Scrooge! You will be visited by three spirits!”

“I told Ken Clarke my only tipple is Laphroaig…”

“NO!” bellowed Thatcher. “Three ghosts! Without their visits, you cannot hope to shun the path I tread. Expect the first tomorrow, when the bell tolls one.”

“Can’t I roll all the visits into one Maggie? A bit like Universal Credit?” whinged Scrooge.

“No! Don’t be ridiculous. That wouldn’t work at all. Expect the second on the next night at the same hour. The third upon the next night when the last stroke of twelve has ceased to vibrate. Look to see me no more; and look that, for your own sake, you remember what has passed between us!”

With that, Thatcher vanished in a cloud of £50 notes. Confused but wary, Scrooge retired straight to bed and fell asleep upon the instant.

When she woke again, it was still foggy and bitterly cold. Remembering what Thatcher had warned her of, Scrooge lay awake, gazing at the ticking clock… Until, after what seemed like an age, it struck upon one.

Suddenly, the curtains, stained rusty gold by Scrooge’s JPS Superking smoke, flung back unaided and an apparition appeared. Scrooge yelped in terror, for it was a strange figure. Like a child; yet not so like a child as like an old woman. Its hair, which hung about its neck and down its back, was white as if with age; yet the face had not a wrinkle in it and the tenderest bloom was on the skin.

Part Three of ‘A Brexmas Carol’ is out on Thursday 21 December. You can read Part One here.