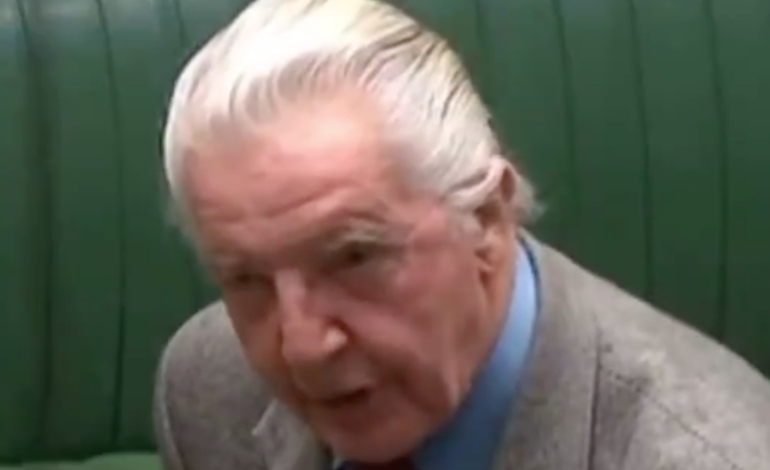 Britain’s oldest MP, Dennis Skinner, only needed 15 seconds to nail Health Secretary Jeremy Hunt’s plans for the NHS. Skinner was talking in the Commons on 19 December about the number of hospital closures around the country. And he spoke about the “growing suspicion” that Hunt wants to:

lose all those beds in the hospitals forever so that the private sector can move in and take the lot.

Dennis Skinner:"There have been more questions about Hospital closures than anything else."
"There's a growing suspicion of what this health secretary (Jeremy Hunt) is upto, leading Hospitals to lose all those beds forever,so the private sector can move in and take the lot"#PMQs pic.twitter.com/D19Nb8b6L8

Hunt denied the claims. According to parliamentary record Hansard, he stated:

Let me just say to him that if that were the Government’s intention, we would not have found an extra £2.8 billion for the NHS in the Budget, including £1.95 million for Chesterfield hospital, which will benefit his own constituents.

But Hunt also couldn’t resist a sarcastic comment at the beginning of his reply when he thanked Skinner for his “Christmas cheer”.

But there isn’t much “Christmas cheer” for our hospitals. There are 100,000 unfilled vacancies across the NHS. And as The Independent reported on 15 December, one in five hospital trusts say that they have had at least one day already this winter where they reached capacity and had no spare beds.

Meanwhile, data from NHS England released in September showed that those waiting twelve hours or more at Accident and Emergency (A&E) from January to March had increased by 10,546% in five years.

And against this backdrop, hospitals and specialist units across England are facing closure under the government’s Sustainability and Transformation Plans for the NHS.

There are many who believe Skinner is right in his assessment of what Hunt is doing to the NHS. And it is the introduction of Accountable Care Organisations (ACOs) which campaigners believe will usher in more private health care. As The Canary previously reported, ACOs originate in the US and will, according to campaign group Keep Our NHS Public:

Professor Stephen Hawking, who had a public row with Hunt over privatisation of the NHS, has added his name to a judicial review to challenge ACOs. Hawking stated:

They have not been established by statute, and they appear to be being used for reducing public expenditure, for cutting services and for allowing private companies to receive and benefit from significant sums of public money for organising and providing services.

But the Department of Health denied the “misleading claims”, saying:

it is irresponsible scaremongering to suggest that Accountable Care Organisations are being used to support privatisation and harm the fundamental principles of the NHS. The NHS will remain a taxpayer-funded system free at the point of use; ACOs are simply about making care more joined-up between different health and care organisations.

But this doesn’t need to be what happens. We can come together and fight what the government is doing to our NHS. Our NHS is precious. And it is down to all of us to hold the government to account and ensure that it’s not sold off to the highest bidder.