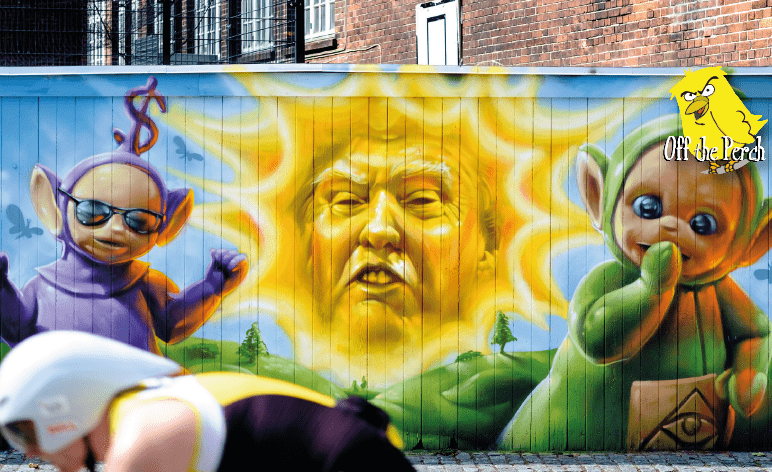 When Donald Trump cancelled his UK visit, many assumed it was to avoid protests. Primarily because he claimed it wasn’t, and he emits less reality than a funhouse mirror.

It turns out there was another reason, though.

A Trump insider, while speaking to one of the access-all-areas reporters who are inexplicably allowed to roam the White House, said that:

Like most stable geniuses, the President likes to unwind during ‘executive time’ with an episode of the Teletubbies. He likes to imagine what it would be like to have a television inside his body. Sometimes I walk in and he’s drawn one on his belly. It’s very… *CLENCHES TEETH*… presidential.

He was watching YouTube to distract himself from a security briefing the other day when he found a video of one of the actors undressing. ‘TINKY WINKY!’ the President screamed. ‘WHAT HAVE THEY DONE TO TINKY WINKY!?’

We tried explaining that the Teletubbies weren’t real. ‘Like Tony Blair?’ he asked – having mistakenly come to think that the former prime minister is a creepy, waxwork dummy.

Eventually he seemed to get it, but he cancelled the UK visit out of anger. He says that, if there are no Teletubbies in the UK, he’d rather go to Sweden and see the Moomins.

We didn’t have the heart to tell him.

Although the trip cancellation is a huge victory for everyone who isn’t Piers Morgan, it doesn’t mean he won’t come here in the future. Especially if he finds out Harry Potter isn’t real and there’s no chance of him getting quidditched.