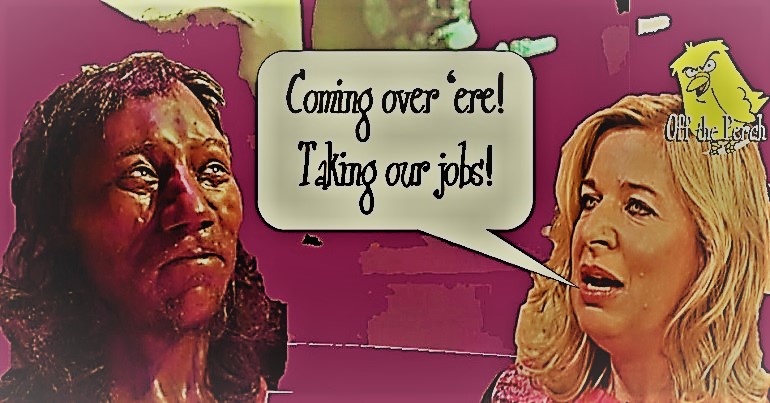 Everyone’s favourite human latrine and all round funky-smelling-due-to-being-at-the-back-of-the-fridge-for-too-long egg, Katie Hopkins, has thrown herself into the debate over Cheddar Man, demanding that the “dirty rat’s remains be sent back to Bongo Bongo Land on the Paleolithic dinghy he crossed the North Sea with”.

Coming over ‘ere. Taking our jobs.

Speaking from Danbury Correctional Centre in Cape Town, Hopkins told digital radio station Very Flat Earth Global that the discovery that Britons could have descended from humans with “blue eyes, a very dark brown to black complexion and dark curly hair” is “horseshit”.

In between snorting lines of ketamine off a Rampant Rabbit, Hopkins noted that:

I mean, who actually believes that some of the greatest white people in British history, like Jesus and St George, were actually descended from a black man? [Inhales deeply] It’s either fake news from some bleeding heart leftie blog site like The Budgie or blatant propaganda from The Guardian.

The far-right political nonsense-gabbler is best known for stints on reality brainbleach like Nick Griffin’s The Unpaid Intern and I’m A Celebrity! Help Me! I Need A Few Quid, Quick! She was fired from her job writing a weekly column at The Daily Stormer for reportedly being “too neo-Nazi”.

And anyway, what the fuck is the Cheddar bit all about? [Sound of deep inhalation] Everyone knows cheese is yellow. And if Theresa May’s government had any sense, they’d send this cheese man back to Bongo Bongo Land via the North Sea that he sailed across.

Very Flat Earth Global tried to tell Hopkins the North Sea didn’t exist in 8,000BC and was in fact a land mass called Doggerland. To which Hopkins said she “hadn’t heard of that particular car park”.

Meanwhile, a woman Off The Perch accidentally spilt our soya milk latte over outside New Cross Gate tube said:

I’d quite like Katie Hopkins to go back to where she came from. But I’m not sure how frequently the trains run to ‘Up-her-own-bullshit-filled-arsehole’.

Featured image via Breaking News Today/YouTube and This Morning/YouTube