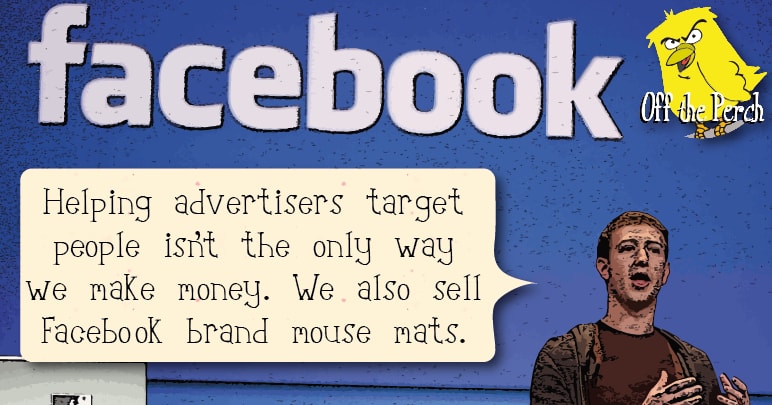 Facebook was allegedly aware of some very dodgy stuff going on with its users’ information. Shining a light on this stuff is bad news for Facebook, as using personal information for dodgy stuff has been a big earner for them.

Businesses that make money by collecting and selling detailed records of private lives were once plainly described as "surveillance companies." Their rebranding as "social media" is the most successful deception since the Department of War became the Department of Defense.

Off The Perch caught up with Facebook’s Mark Zuckerberg to find out more:

Obviously it will be difficult to regain people’s trust. We know exactly what people like, though, and we’ve got some great targeted ads that we just know you’re going to love.

Zuckerberg then handed me a Cadbury’s Double Decker – a strange coincidence as it was my grandfather’s favourite chocolate bar, and it was the anniversary of his death.

“How did you know?” I asked, as the tears began to well.

“Shh,” Zuckerberg said, as he put a finger on my lips and pulled me into a hug.

I later realised that Zuckerberg had used my personal information to elicit a predictable response from me.

This is the unique selling point that Facebook has for advertisers, though. As such, it will be interesting to see if it can carry on earning the big bucks after it stops treating its users like cattle.