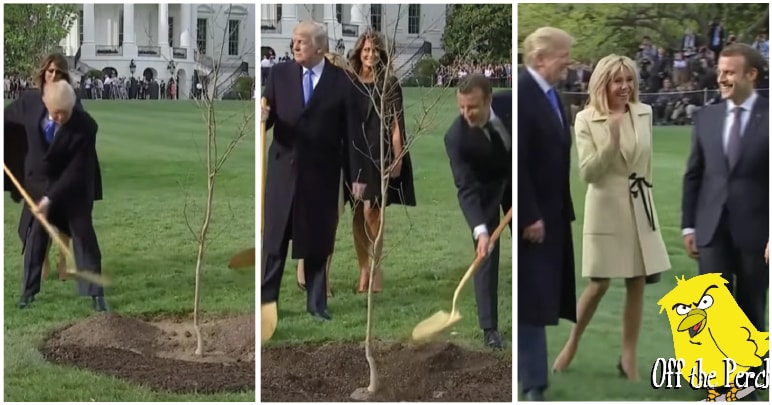 Commentators were confused on 25 April, as Donald Trump and Emmanuel Macron savagely beat a young tree to death. Said reporters quickly changed their tune, however, when it was revealed the sapling may not have been so innocent. Because this tree, according to the self-styled ‘stable genius’ himself, was actually:

A REALY BAD TREE! Links to Assad, Clinton, Arnold Sjhghjsgawarzenneger, Rosie O’ Donnell – the list goes on! HAD TO BE STOPPED! I did the world a favor, but of course the FAKE NEWS media say otherwise!

In reality though, this is one issue in which Trump has the liberal media’s full support.

THERE WILL BE SAP!

When the media realised the tree had allegedly broken international law, they were quick to publish headlines like:

When Trump pulverised that clearly evil shrub to death with his patriotic fists, he finally became the president we deserve.

Trump is an illiterate orangutan whose brain has been warped by its close proximity to hair bleach and evil.

Don’t trust him! Never trust a word he says! DO NOT TRUST HIM!!!!

This American thirst for blood spread around the world.

Well – it spread to Britain, anyway. The only other country that still thinks ‘revenge’ is an effective diplomatic tool.

He told one caller to his show:

Fuck the evidence! That tree had chemically infused wasps in it, and anyone who says otherwise is a pissy-pants terror-lover!

O’Brien then ripped his shirt off, shouted “OI! OI! OI!”, and headbutted a nearby vending machine he suspected of having Russian sympathies.

Having cooled down from their original mania, news outlets are now reporting that the tree-savaging was a:

Which translates as meaning:

There were no real benefits, but at least it didn’t start World War Three.