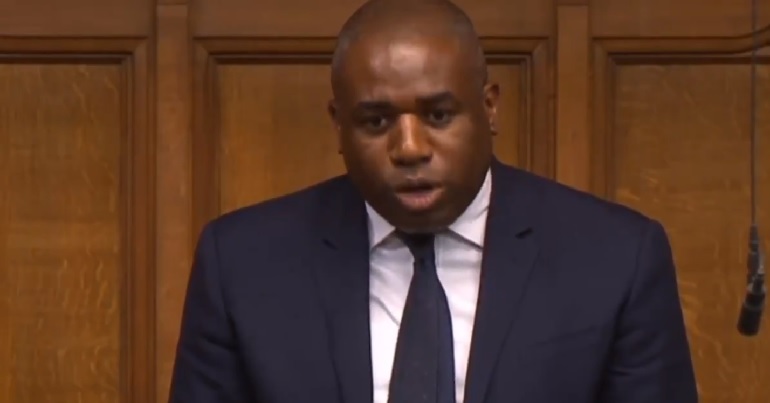 Conservative Party legislation from 2014 has devastated the lives of many British citizens. And numerous stories have recently come to light, showing the disgusting extent of the destruction.

The fiasco has also summoned comments from racists with no apparent grasp of history. But fortunately, Lammy has set them straight.

The racist backlash, and Lammy’s response

On 23 April, Lammy tweeted out one of the hateful letters he had received. It said he should be “grateful” that Britain ‘gave him a life’. And if he didn’t stop speaking out against injustice, it said, he should ‘go back to wherever he originally came from’.

The MP responded with dignity and resolve, insisting:

I was born in the Whittington Hospital [London] the son of Windrush migrants. And I will speak for them.

He also gave his critics a brief and important history lesson:

And let me be clear, following the 1948 Nationality Act my parents and the Windrush Generation were invited here as British citizens. Learn your history. Citizens have been retrospectively renamed as “immigrants” as a result of legislation & policy pandering to far-right rhetoric

Here is the relevant section of the 1948 British Nationality Act. The Windrush Generation were British citizens when they were invited here. Their citizenship is theirs by right. It is not a gift that your government is benevolently granting them. They are reclaiming their rights pic.twitter.com/rQYx0zu6um

As home secretary, current prime minister Theresa May brought in the 2014 Immigration Act. This removed a key protection against deportation for people from Commonwealth countries who came to Britain after the Second World War to help the country rebuild. Parliament passed the British Nationality Act in 1948, giving these people British citizenship and full rights of entry and settlement in Britain. Among the first arrivals were 492 immigrants from the Caribbean who arrived on the ship HMT Empire Windrush.

May’s policy has since plunged many lives into chaos. This has led to calls for her resignation and the resignation of current home secretary Amber Rudd.

On 24 April, Lammy tweeted that he had “heard from 6 constituents already this morning with Windrush cases and it is not even lunchtime”. He added:

The scale of this crisis is unfathomable.

He has been at the forefront of criticising the government’s woeful response so far, calling for a review and for “new personnel” at the Home Office. And he told Amber Rudd:

Home Secretary, you are mistaken. The Windrush children were British citizens when we invited them here 70 years ago, as a direct result of colonialism and empire. Their British citizenship is theirs by right and is not something that your Govnt is now choosing to ‘offer’ them. pic.twitter.com/tQCLa0K5GF

But Lammy hasn’t stopped there. He has also called for government compensation for the victims of the 2014 legislation, saying:

As Caribbean people, we are not going to forget our history. We don’t just want to hear an apology. We want reparation.

Four committee rooms packed to the rafters last night protesting the Windrush injustice. As Caribbean people enslaved, colonised and invited to Britain as citizens we remember our history. We don't just want an apology, we want reparations and compensation pic.twitter.com/cOY77UgWhz

And the historical memory of slavery and colonialism has not been lost on Lammy. In parliament, he said:

Everybody in the Caribbean is there because Britain and other European countries brought them from Africa to the Caribbean… I and others are in this country because my parents were born under the British Empire.

He also insisted that people from the Caribbean have “given so much over so many hundreds of years”.

The #Windrush generation and their children were citizens when we invited them here 70 years ago. Their citizenship is theirs by right and it should never have been taken away. I am proud to have fought to right this historic wrong. I will never stop fighting for justice. pic.twitter.com/HlHmKgJtfl

As Lammy suggests, the whitewashing of history must stop.

But it’s not just the Windrush generation that deserves reparation for its treatment by the Conservative government in recent years. It’s all of those who have suffered throughout the centuries at the hands of British colonialism. And we owe it to every last one of them to never let racists and historical whitewashers fool or divide us ever again.