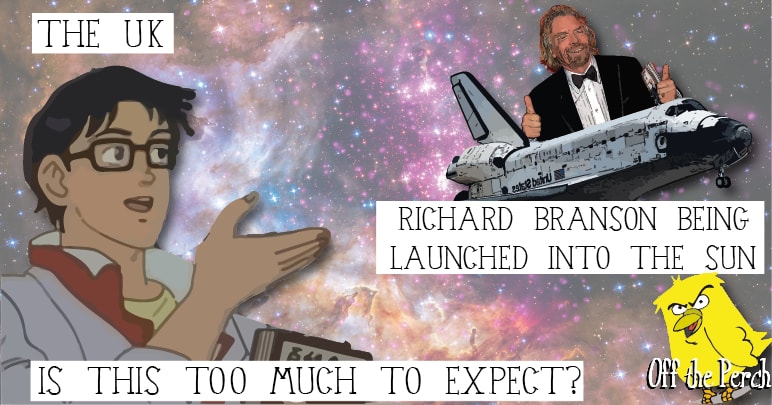 There was much rejoicing in Britain on the 26 May, as Richard Branson announced plans to blast himself into space. Said rejoicing has now ended, however, as the arsehole is also planning on coming back.

Branson is famous for buying UK infrastructure and using it to profiteer from people, including those who are poor and sick. As such, he’s exactly the sort of person you’d launch into the sun.

Being the selfish prick that he is, though, Branson would like to carry on not being launched into the sun. He told one journalist:

This laughing went on for ten straight minutes, but it would be ludicrous to type out all of the HAs, obviously.

You can keep him

The story has gotten even stranger too. Namely as aliens made first contact with the UK to issue the following proclamation:

PEOPLE OF THE PLANET PLASTIC WASTE, HEED OUR CALL! WE HAVE BEEN WATCHING YOUR SPECIES WITH INTEREST. PARTICULARLY THE ONES YOU REFER TO AS ‘CUNTS’.

FOR SOME REASON, YOUR SPECIES TOLERATES DOMINATION BY THESE PEOPLE. WE HAVE ZERO TIME FOR THAT SHIT IN SPACE, HOWEVER! AND IF YOUR RICHARD BRANSON LEAVES YOUR PLANET, WE WILL BE FORCED TO ERADICATE HIM WITH OUR SPACE LASERS!

Branson is said to be disappointed with the alien threat, although he did see the logic of it. He also said:

It’s a real shame, actually. I was planning on popping my cherry and becoming the first person to privatise the moon.

Everyone else is saying he should just risk it and leave the planet anyway.