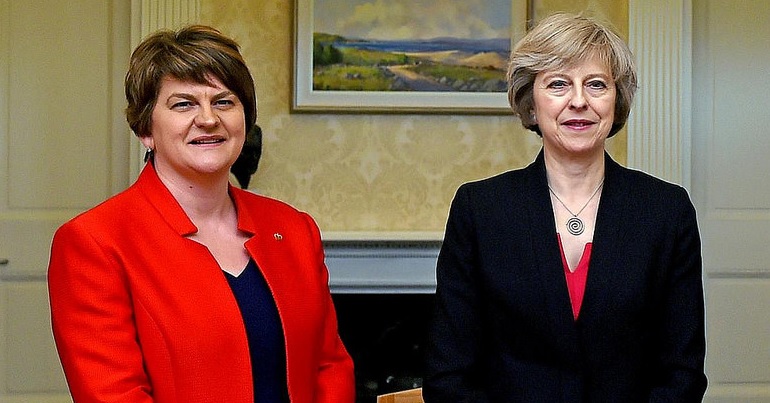 Pressure is mounting on Theresa May to bring about change to abortion law in Northern Ireland. This comes after an overwhelming vote to repeal strict abortion laws in the Irish Republic.

But May will likely face fierce resistance to change in Northern Ireland’s abortion law, from the DUP. This could put pressure on the Conservative/DUP deal that is propping up May’s government.

On Friday 25 May, 66.4% of Irish people voted to repeal the eighth amendment of the Irish constitution. This amendment had effectively made abortion illegal in Ireland, as previously reported by The Canary.

There are now calls to do likewise north of the Irish border. As the UK’s 1967 Abortion Act was not extended to Northern Ireland, abortion is effectively outlawed there.

The situation in Northern Ireland is described by the committee on the elimination of discrimination against women (CEDAW) as:

violence against women that may amount to torture or cruel, inhuman or degrading treatment

Based on the exit poll, a historic & great day for Ireland, & a hopeful one for Northern Ireland. That hope must be met. #HomeToVote stories are a powerful and moving testimony as to why this had to happen and that understanding & empathy exists between generations. #trustwomen

Northern Ireland does not currently have a sitting government. But May could help bring about change from Westminster. Liberal Democrat leader Vince Cable believes the prime minister should do just that. He said:

The position in Northern Ireland is now highly anomalous and I think, probably, action will now have to be taken.

May faces pressure from others within her party, and over 140 MPs, to make efforts to secure abortion in Northern Ireland.

But the DUP strongly oppose abortion. Some of its members even campaigned [paywall] against abortion in the Irish Republic. DUP MP Ian Paisley responded to the result in the Republic:

May has the power to bring about change to abortion law in Northern Ireland. She must now decide whether she will do so.

But neither May nor the DUP can ignore the will of the people of Northern Ireland. Demand for change has been growing there. And in light of the result in the Republic, it’s not going to wane.