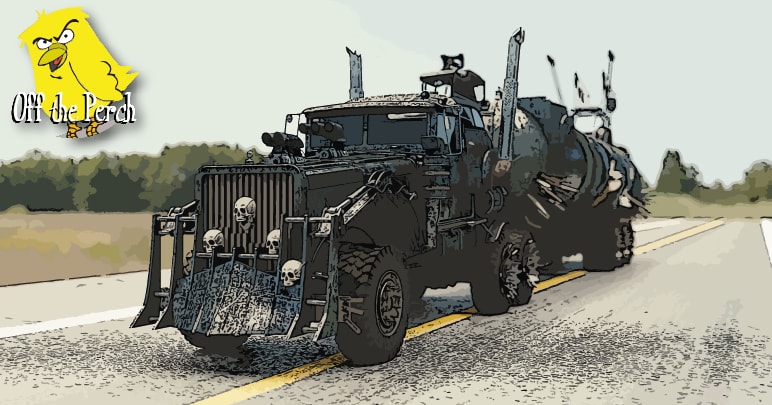 There’ve been many Brexit questions about how the Irish border issue will be resolved.

Well, not so much questions. It’s more a case of one group saying:

Our plan is to come up with a solution.

And the other group saying:

An answer has now been found though. Namely, a 10-mile-wide border referred to as the ‘Mad Max zone’.

As much sense as anything else

Dave Davis, the man who came up with the plan, had this to say:

Our original plan was to create an area in which both EU laws and British laws applied. We couldn’t work out how anyone would leave the zone though, as we still hadn’t invented magic.

As such, we just kind of thought, ‘wouldn’t it be fun if the zone had no laws whatsoever – like in that Mad Max film?’

According to Davis, the border will be classified as foreign soil. The plan is for lorries entering the Mad Max zone to be attacked by raiders. Once their goods have been raided, they will no longer be classified as ‘produce’, and instead categorised as ‘booty’.

This creates an opportunity, as it’s legal for anyone with enough influence to loot foreign entities. This follows the precedent set by the Iraq war/Starbucks. And it will see the UK and Ireland regularly invading the Mad Max zone to reclaim the portion of their goods that haven’t been eaten by starved, wasteland barbarians.

Of course, there are some problems with the idea. For starters, a trial run of the scheme saw 17 lorry drivers being brutally murdered. It was also a much lengthier process than simply having a murderless border.

Finding people to live as raiders has also been difficult. Which is somewhat surprising, really. Because if people didn’t want to live in a dystopian hell-scape, why vote for a Tory Brexit in the first place?