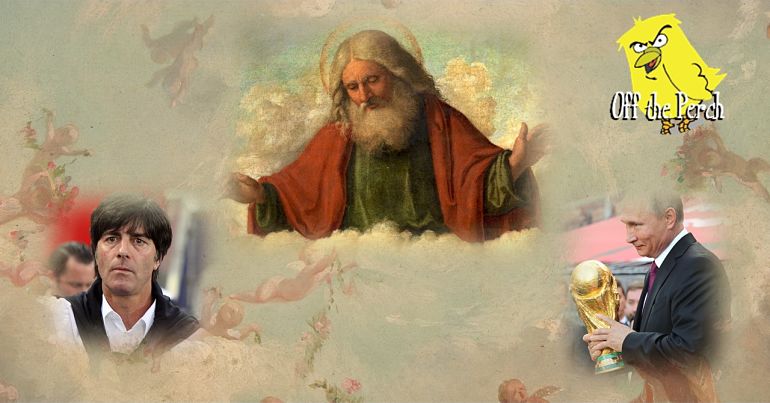 A spokesperson for God last night declared the almighty “absolutely gutted” after the team he supports failed to progress from the group stage of Russia 2018.

This is concerning. The teaching of the Church has always been that God is neutral in matters of sport, politics and the Eurovision Song Contest. I’ll be hosting an ecumenical Skype this afternoon with Pope Francis and other religious leaders. The Church of England will be calling for 24-hour prayer meetings to ask the Lord to transfer his allegiance to Harry and the boys in the knockout stages.

We’ve heard from Messi, who, let’s face it, is basically God for anyone whose religion is football, that Argentina were bound to go through because God wouldn’t let them lose. I dunno if he cleared that with the Nigerian players, either the Christian ones or the Muslim ones.

Amid speculation that maybe Germany was the team with divine backing, England fan Terry Chestnuts said he couldn’t see it:

Nah! God wouldn’t be a Germany fan. Their players aren’t even Christians. Oh, some of them are? And Muslims? Christ! But surely he’d want England to win. It’s like World War Two, isn’t it? Not that I’m into all that. The closest I’ve got to praying was shouting “Please Jesus don’t let Kane take corners” at the car radio two years ago.