Cabinet settles its Brexit divisions with a Royal Rumble - Canary 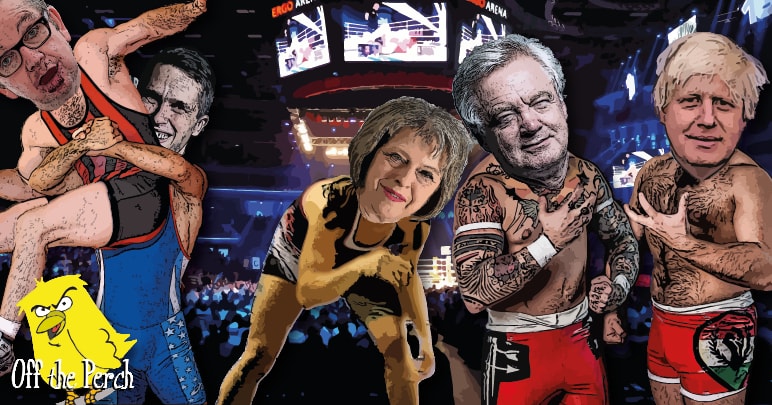 The UK government has been struggling to decide which Brexit plan is the best for two years now. Largely because none of their plans are very good. Although they still have to pick the least worst of them.

Michael Gove showed his dissatisfaction by tearing up a Brexit plan with his bare hands – a feat which took him and his oily hands mere hours.

This act of wanton aggression gave May an idea though. Maybe they could wrestle for it?

May didn’t do any wrestling herself – claiming that refereeing better suited her status. It’s unclear if anyone else respected this status, though, as they all kept ignoring her.

The ring was empty when Jacob Rees-Mogg entered, but he was soon joined by disgraced former defence secretary Liam Fox. The pair actually had a very similar plan for Brexit, but they attempted to stab one another in the back anyway. They are Tories, after all.

The pair were still tussling when Boris Johnson came bounding into the ring. Johnson bounded straight back out when he discovered the winner would get to enact their Brexit plan, though.

The royal rumble went on for several hours, as the Tories’ lack of upper body strength made it difficult for them to grapple. It ended with everyone in the ring collapsing from heat stroke actually. And by default, this meant May was the winner.

“Yes…” she muttered victoriously. “We’ll enact my Brexit plan. And what was that again, exactly?”