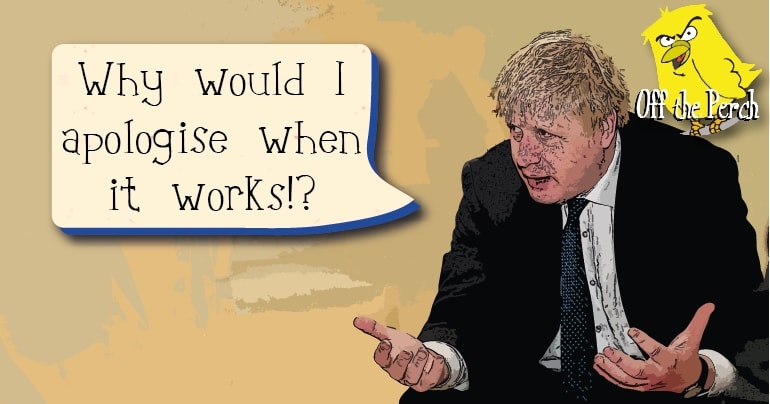 Johnson is refusing to apologise for his behaviour. Not because he disagrees with the accusation. Simply because being a massive cunt is what pays the bills.

Many people have reasonable arguments for disliking the burqa. Johnson’s argument was:

I dunno, they look like ninjas or some shit.

How am I – the man behind Vote Leave – supposed to trust someone when they’re all covered up like that?

I’m not saying we should have a race war, but I am saying the words ‘race war’ and blowing this dog whistle I have quite loudly.

It’s about time we refocused on BRITISH values. If that’s not obvious enough, please understand that I’m pointing at my own pasty white skin when I say the word BRITISH.

Theresa May responded by saying:

Boris Johnson should apologise for being a massive cunt. We’ve worked very hard to make people think we’re not just a toxic shower of twats. We’ve worked less hard since getting into power, obviously, but still – Johnson’s just taking the piss.

Johnson still refused to say sorry, leaving May flapping like a stranded fish. When she asked if he was sure he didn’t want to apologise, Johnson said:

“I’ve been getting away with it for decades: why stop now?”