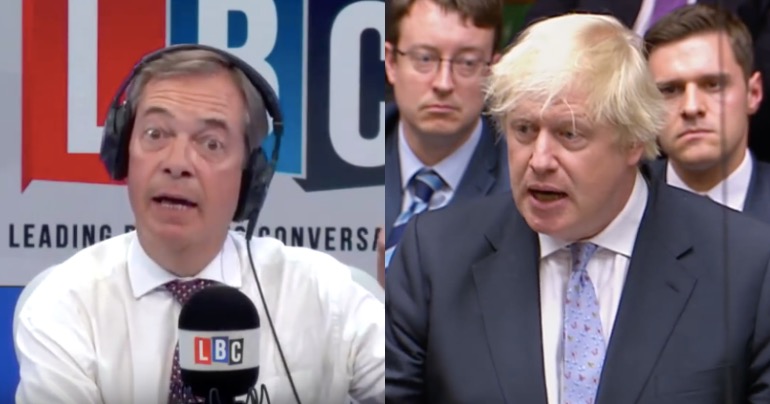 In a worrying segment on his LBC radio show, Nigel Farage said that Boris Johnson’s Islamophobic attack on burqas has made him “more likely to be Tory party leader”.

Farage made his claim in response to Johnson’s Telegraph column. Johnson said [paywall] that Muslim women who choose to wear burqas look like “letter boxes” and ‘bank robbers’.

During the segment, Farage said:

I have to tell you, folks – I think that, given that the Conservative Party leader is chosen from amongst paid up Tory party members, in my view, having made these comments makes him more likely to become Tory party leader, and not less.

Farage thinks that Johnson would appeal to voters who are sick of political correctness. He argued: “People are pretty sick to death of a very politically correct prime minister who never ever speaks out of turn on any single subject”.

Despite Johnson’s reputation for being “gaffe-prone”, Farage believes these were calculated comments. He argued Johnson was fully aware of the backlash he would receive, saying:

This wasn’t an off-the-cuff comment after a glass of wine. This was an article that he sat down and wrote… Boris, he’s many things, but he’s not stupid. He knew what the reaction to this was going to be.

Boris Johnson’s comments about the burka may have infuriated some, but @Nigel_Farage thinks they’ve made him more, not less, likely to be the next Tory leader pic.twitter.com/qVQ901k7Jq

The normalisation of Islamophobia

Farage’s comments have amplified concerns that Islamophobia is becoming increasingly normalised in the mainstream media and within the Conservative Party. As The Canary previously reported, former Conservative chair Baroness Warsi confirmed the deep-rooted Islamophobia problem within the party.

I refuse to accept that these phrases were some kind of mistake, and the offence inadvertent – Johnson is too intelligent and too calculating for that. No, this was all quite deliberate. His refusal to apologise supports that.

Farage – who supported the idea of a Trump-style ‘Muslim ban’ for the UK – knows first-hand how to use anti-Islam rhetoric to bolster political support. Someone else who employed this tactic is Boris’s new ‘friend’ Steve Bannon.

But despite Islamophobia in the Conservative Party, May has taken no substantial action. The party has largely ignored claims of Islamophobia, and prior to this incident, the media have severely underreported it. Instead, they have opted to give platforms to Steve Bannon and Stephen Yaxley-Lennon (aka Tommy Robinson), who openly attack Islam and multiculturalism.

Should Theresa May be removed from her position as prime minister, Boris is one of the favourites to take over. And the BBC reports that a source close to Johnson said he “won’t be apologising”, claiming attacks on his views are “ridiculous”.

But if Farage is right, Britain faces an increasingly frightening future. That future being an openly Islamophobic governing party that attacks Muslims to win votes.

– Read our other articles on Tory Islamophobia.