Farage returns with intention of becoming the next James Bond - Canary 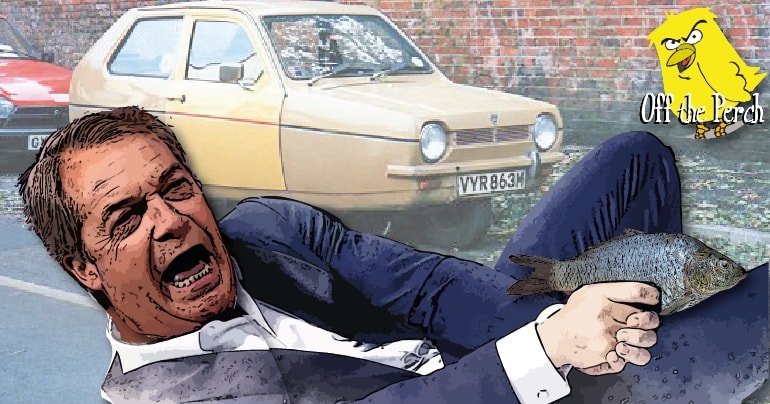 Earlier this week, Idris Elba was rumoured to be the next James Bond. As Elba is an attractive/suave man who can wear the shit out of a suit, most people were excited by this. Angry right-whingers were not.

The Brexit group Leave Means Leave was so angry it proposed the role should go to Nigel Farage instead. This is how Farage responded:

I pledge my absolute and total support to Leave Means Leave and will go back on the road to campaign.

Over the last few months, scores of people have stopped me in the street to ask: “When are you coming back?”

Well now you have your answer: I’m back. https://t.co/7gTH9uNVuC

Farage has now hit the road to show people he has what it takes.

Farage put a show on in South Thanet. Due to political correctness gone mad, he wasn’t allowed to handle an actual gun. Thankfully, he had the next best thing – a dead fish. He carries a box of them around in his Robin Reliant in case he needs to flytip for publicity.

People are outraged I dumped dead fish in the Thames during a Brexit protest. But was I right? #FarageOnLBC https://t.co/CFXXPxsPsN

Farage also showed off his skills with the ladies. He approached one young woman and said:

Hey, sugar tits. They call me Mr Brexit, because when I exit you, I won’t be paying any bills.

This elicited a slap. A confused Farage shouted in protest:

But I’m saying you’re not a prostitute! That’s a compliment!

From Russia, with love

For his big finale, the would-be-Bond showed off his espionage skills. He did so by displaying several documents that highlighted the links between himself, Russia, and the Trump campaign. He quickly realised this was a bad idea, and started burning them with his fag lighter.

If successful, Farage will be returning in:

You Only Run For Office Without Success Seven or Eight Times