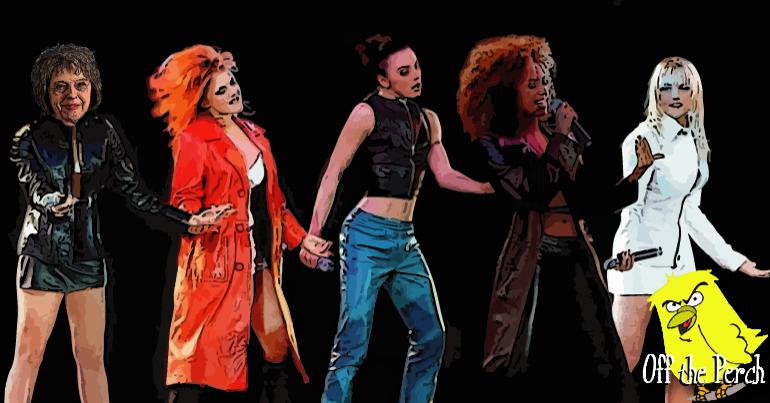 The Spice Girls are back on tour! But there’s a problem. The famous five are now only four as Victoria-pout-can’t-sing-Beckham has chosen to stay at home and direct her minions to make more overpriced clothes instead. However, all is well in Spice World. Because they’ve signed up Theresa May.

Off the Perch caught up with the Spice Girls to find out more about May’s entry to ‘Girl Power’. “Oh, we don’t do Girl Power now,” said Emma-infantile-spice-Bunton. “We’re all about People Powaah now!” She went on:

We got fed up, when everyone who said ‘Girl Power’ didn’t get us. We’re all feminists – that’s not about women, that’s about making sure men don’t feel left out. So we love Tezzy May, because she doesn’t think women need feminism either. And she can dance.

Catching on to the hot issue, Gerri-bad-PR-for-ginger-Spice got really excited:

Yeah great dancer! She got more hits on her Insta this year than I did with those moves. We love her, and that shows how much we really love women. Yeah. People Powaah!

So, tell May what you want, what you really, really want…

At this point, the girl’s – sorry people’s – new tour manager, Boris Johnson appeared. “Aren’t they great,” he said, beaming and winking. “Have you shared the new hit yet?” he asked, as he undid a few buttons on his shirt to reveal a sequinned Union Jack singlet. At this, the four jumped up, pulled on May masks in perfect synchronisation and formed a conga line – singing as they did so:

Yo, tell May what you want, what you really, really want.

Johnson joined the line singing too:

Yeah, tell May what what you want, what you really, really want.

Together, they sang in perfect discord:

With this, they congo-ed away. With the exception of Mel-not-scary-these-days-Spice, who flicked the v’s and walked off in the opposite direction, saying:

I don’t even fucking live here any more. Where’s Simon Cowell? He promised me a hit single with Sinitta and Gary Barlow.