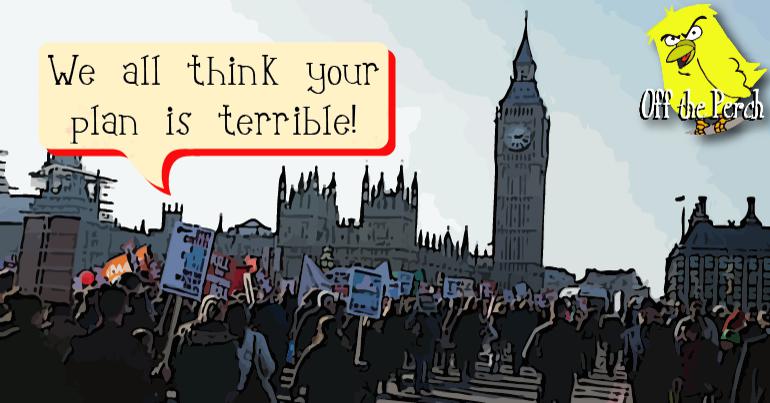 Since 2016, the people of Britain have been drifting apart. Theresa May has done the unthinkable though. She’s managed to bring everyone together in agreement that her Brexit plan is the worst option of all.

There are three main groups in the UK:

Brexiteers hate May’s plan because it means being tied to the EU’s rules. Remainers dislike it because we’d lose all our EU privileges. Everyone else loathes it BECAUSE IT MEANS PROLONGING BREXIT FOR SEVERAL MORE FUCKING YEARS! JESUS! ENOUGH ALREADY!

Protests were briefly planned, but agreeing on a chant proved difficult. The hardcore Brexiteers suggested:

The British Empire and ‘Allo, Allo’ back on TV!

To get back to a status-quo in which we can pretend everything is tickety-boo because the only ones affected are plebs, foreigners, and people who give a shit!

And everyone else demanded:

TO STOP FUCKING TALKING ABOUT BREXIT!

I’M FURIOUS AT MYSELF FOR EVEN CHANTING THIS SHIT!

It’s difficult to see who could (or would want to) replace May at this point. Although by the time this is published, you probably already know. You might even know who replaced the replacement.