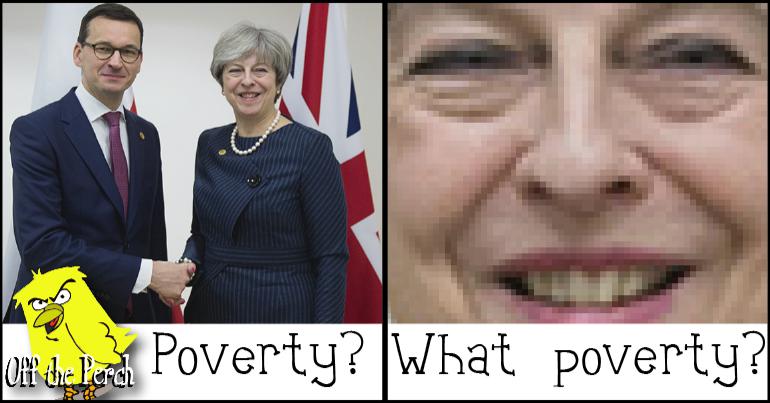 Yet another UN report has criticised austerity in the UK. This report said that Tory ministers are in denial about the problem. The Tory ministers in question responded by saying:

#marr
Kwasi Kwarteng just denied that poverty was a problem in U.K., proving what UN rapporteur said about Ministers being in denial.#SocialistSunday#GeneralElectionNow

Andrew Marr interviewed Kwasi Kwarteng about the issue, and he – you guessed it – denied the problem. Marr didn’t interrogate further, as he needed more time to talk over Shami Chakrabarti:

When journalists later asked Theresa May, she repeated the party line:

In response, someone shouted:

May didn’t fall for it, though. Tory politics have been a pantomime for decades, so she knows how it works.

Some Tories are worried that simply ignoring poverty might not be enough. As such, they’ve proposed:

As you may have noticed, the Tories are well along the way with that third option. Obviously, you might see a poor person interviewed every so often when one of their loved ones is austerity’d to death, but that’s just for colour. The majority of news is driven by well-off types who think of poor people as zoo animals we need to manage better.

That’s why the Tories get away with: