May launching knighthoods at anyone who’ll support her deal - Canary 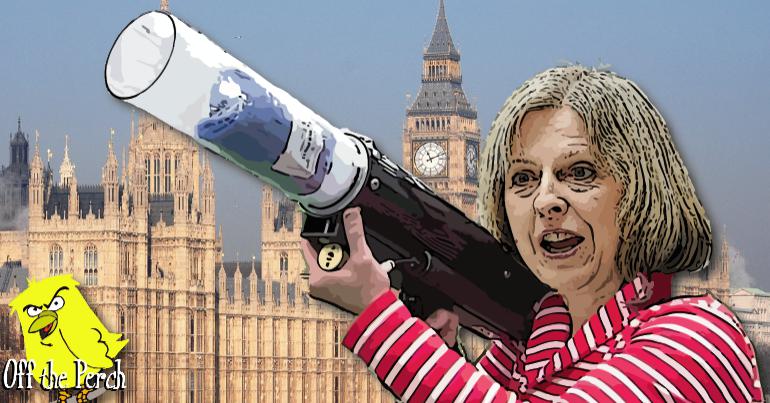 With support for her deal thin on the ground, May has had to convince people to back her. This is suspected to be why Eurosceptic MP John Hayes received a knighthood this past week. It’s also why May is running around Westminster with a modified t-shirt cannon – firing honours at anyone who’ll back her.

Liam Fox called for a press conference outside Parliament. People believed he would be abandoning May, but the wily PM was watching from the bushes. As soon as he spoke out, she fired a knighthood at him. A pleased Sir Fox winked at the cameras and said:

Later in the day, a similar thing happened with the now-Dame Leadsom. The problem for May is that all of her MPs realised they could use this cheap ploy to get an honour for themselves. This led to a situation in which MPs were running out to Parliament Square, while the PM – perched atop a lamppost – elevated their standing with her honours cannon.

People have asked if firing out honours like this might diminish the integrity of the system. As we’ve got knights like Sir Philip Green and Sir Nick Clegg, however, the idea that the honours system ever had integrity is nonsense.