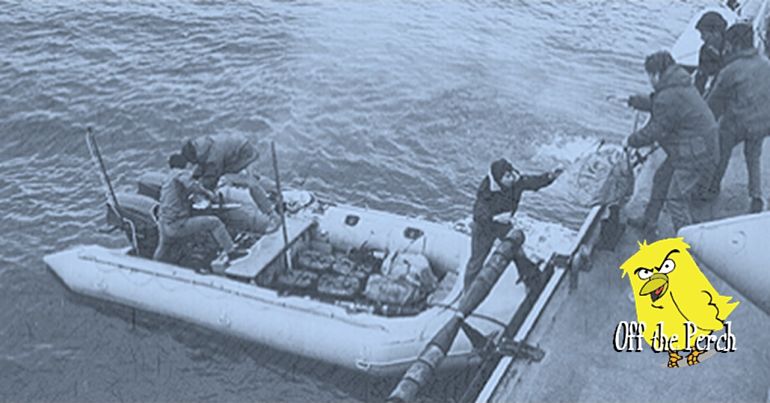 Off The Perch understands that home secretary Sajid ‘The Saj’ Javid and transport secretary Chris ‘Failing’ Grayling are due to make a joint announcement concerning the hot news topics of the festive break. In a move that one insider called “two birds with one stone”, the government will be hiring rigid inflatable boats from cross-channel people traffickers and using them to transport vital supplies from the continent when Brexit goes arse up.

But it seems they’ve come up with a joint plan. It’ll solve Javid’s ‘problem’ of “absolutely loads” of people getting trafficked across the channel. And it’ll solve Grayling’s problem of that really dodgy sounding ‘ferry company’ not being an actual ferry company.

Someone from Liam Fox’s international trade department met us in an underground car park. She spoke on condition of anonymity and with the assurance that we’d edit what she said so it sounded less ridiculous:

Although we’ve got Sajid and Chris up in front of the cameras, this whole show is actually being run from Liam’s office. Or East India 2.0 as we call it. The scheme’s a quadruple win.

One: Chris can now show that he’s dealing with people who own real boats. Everyone can see that – the boats have been on TV 24/7 for the last week. OK, they’re quite small, but there are plenty of them. Well some. Well, a few, but they can go back and forth very quickly. Two: the start-up companies that run these boats will get handsomely rewarded. Proof once again that this government is on the side of small businesses and entrepreneurs.

Three: Sajid solves his ‘migrant problem’ at a stroke. There won’t be any because it’ll be worth more to the boat owners to shift red wine, Polish Viagra and stock for Aldi. Four: most importantly, we’re putting the government’s ‘goods before people’ policy into practice. The PM doesn’t like to talk about it openly but it’s been the only word in Whitehall since 2016.

In related news, the BBC insists its blanket use of the word ‘migrants’ is due to “overzealous” spell-checking software which the corporation brought in to replace all the sub-editors it laid off over the last ten years. Apparently, it should say ‘people’.