The Department for Work and Pensions’ (DWP) start to 2019 began in scandal; much like the end of 2018, really.

The DWP: should auld acquaintance be forgot…

Independent news sites Vox Political and Universal Credit Sufferer both reported on the Queen’s New Year’s Honours. They highlighted the fact that the list named several members of DWP staff. Both also noted the fact that the new work and pensions secretary, Amber Rudd, gleefully tweeted about the rewards:

Congratulations to @DWP staff receiving #NYHonours. I’m thrilled the work of those who go above and beyond in their local area, be it helping disabled people in Birmingham enjoy a more independent life or helping disadvantaged people in Wales get into work, is recognised. 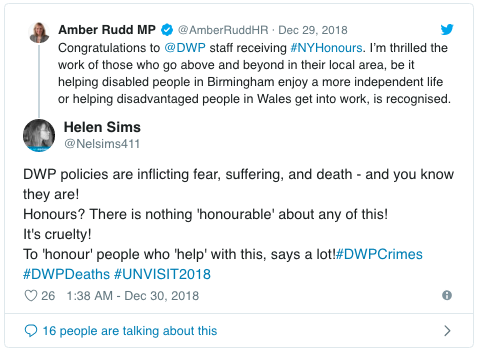 Some of the DWP recipients were local staff. So it would be ungracious to knock what could have been efforts by them to go “above and beyond”, as Rudd put it. Also, as HuffPost reported, with 70% of DWP staff saying their department should stop the contentious Universal Credit rollout, these front-line team members may well have their own issues with their bosses.

But there were two senior civil servants on the list. And neither have room for celebration.

… and never brought to mind…

One gong went to Julie Gillis, a DWP programme director. As the FT Adviser reported, she is heading up a study on the pensions dashboard that’s being rolled out. It said:

The plan behind the pension dashboard, which is due to be launched in 2019, is to create the technology to enable savers to see all of their retirement pots in one place at the same time, giving them a greater awareness of their assets and how to plan for their retirement.

The dashboard was mired in scandal in 2018; not least because of reports that former DWP boss Esther McVey wanted to “kill off” the project. More recently, Brexit was rearing its ugly head; putting a possible spanner in the works of the rollout.

But the other senior DWP civil servant on the honours list is perhaps even more controversial.

We’ll take a cup of kindness yet…

Richard West also got a gong. He is the DWP’s disability services and dispute resolution director. But as a Freedom of Information (FOI) request from 2017 noted, he was also the most senior civil servant responsible for the scandal-hit Personal Independence Payment (PIP). West’s LinkedIn profile states that he is currently:

Accountable for providing disability benefits and services to around 5million customers each year in UK and abroad.

But aside from PIP, as disability services director West has overseen the DWP cutting disabled people’s benefits. As The Canary exclusively revealed, the DWP has cut DLA and Attendance Allowance in real terms despite ministers’ claims it hadn’t.

After the year the DWP have had, the last thing any reasoned person would expect is for them to be bragging about this.

Judging by the DWP’s track record, and the apparent rewarding of failure in the honours list, 2019 will probably be more of the same. Unfortunately for the department, there are plenty of campaigners not wishing it a ‘Happy New Year’.