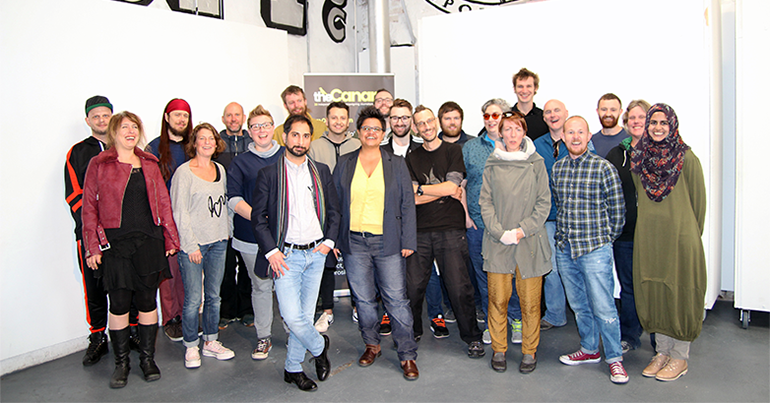 We need your help.

These are uncertain times. We’ve seen the mess of Brexit, Donald Trump, and the rise of the far right across Europe. As for the Conservative government’s austerity cuts, the worst is yet to come. But over the last three years, The Canary has risen to challenge the dominance of the right-wing press in a David and Goliath battle.

That’s why I’d like to explain how your donation will enable The Canary to continue holding the powerful to account, reporting the unreported, and giving you the other side of the story from the mainstream media.

In the UK, four billionaires dominate the mainstream media:

These men are the epitome of the 0.1%. And the news outlets they own are so at their mercy that rocking the neoliberal boat is out of the question.

The Canary – the story so far

We launched just over three years ago, with less than £500 of our own money. We have no corporate backers, no major donors, and we operate a lean and efficient business model. But we still think it’s vital to pay our writers a fair wage for their work – something that hasn’t always been a given in alternative media. To do that, we carry advertising on our website and run a supporter scheme, which anyone can join for a monthly fee of £3 or more.

Since our launch, we have experienced considerable success. In 2016, we overtook the website traffic of major titles including the Times, the Economist, and the NewStatesman. During the 2017 UK general election, we reached over seven million readers. In fact we were widely credited with (or criticised for) helping Jeremy Corbyn’s campaign gain seats, thanks to our counterpoint to the mainstream media.

Our investigative work, meanwhile, has uncovered push polling during the EU referendum, election expenses fraud by the Conservative Party, and the DWP’s cuts to disability benefits. We have also sent reporters to Syria and Turkey to report from the ground, giving you accounts of war and politics in the Middle East that you just won’t get from the mainstream media. And we’ve undertaken numerous interviews with people whose voices you wouldn’t hear otherwise.

The threat of internet monopolies

But our business model relies on traffic to our site. And our mission is to bring about change through campaigning journalism that reaches as wide an audience as possible. So we’ve relied heavily on Facebook to connect with readers. But since the start of 2018, Facebook has been making it more and more difficult for us to do that. Google has also proven itself fickle in this respect, ‘shadow banning‘ us for a time.

We are always looking for alternative ways to distribute our content and break free from the big monopolies of the internet. But at the same time, we still need to pay our writers.

We have a diverse team from all walks of life, from across the UK and beyond. But none of us is well off. Nobody is earning much money. And the thing is, none of us really wants to. However, we do have bills to pay to keep ourselves and our families housed, fed and clothed.

Our varied backgrounds make us better placed than most other media outlets to tell the stories of ordinary people; to point out where power oppresses women and minorities; to know in our bones what it is like to be counting the pennies and to genuinely strive for change.

What you don’t see is what happens behind the scenes, from our rigorous five-gate editorial process to the gentle, cooperative, supportive environment we have created in our newsroom.

I can only speak personally, of course. But I have never worked in a team like this before. The writers, section editors, copy editors, sub-editor, operations manager, and directors are all, without exception, tremendously passionate about The Canary vision of a free and fair society where people and planet are nurtured.

Where does your money go?

When you give money to The Canary, you enable us to earn a living, to support our families, to contribute to local economies (we are dispersed across the UK and beyond), and to keep doing what we do best to bring about change in our world.

45% of your donation, after minimal costs, goes directly to writers, divided and distributed according to the number of articles written the previous month.

We use revenue as follows:

Right now, we need your help more than ever. So please sign up for a monthly or annual subscription. You’ll get an ad-free version of the site and the chance to be part of a growing community of people who are sick of the status quo and want to create a world that works for everyone.