The DWP has finally revealed it has cut disabled people's benefits. Here's by how much. - Canary

A Department for Work and Pensions (DWP) minister has made a damning admission about benefits spending. The DWP has repeatedly claimed it’s increasing disabled people’s entitlement. But new information shows that these claims were, as one campaign group put it, “lies… to justify their atrocious policies”.

DWP minister of state Sarah Newton has repeatedly said that spending on disability benefits has been increasing. Her latest claim was that:

Her claims have been widely debunked as they include benefits not just for disabled people, like Housing Benefit and Carer’s Allowance. The true figure for 2017/18 was £39bn; Newton claimed it was over £50bn. The DWP has also claimed that spending on disability benefits such as Disability Living Allowance (DLA) and Attendance Allowance have increased in real terms; that is, adjusted for inflation. This is while some working age benefits like Jobseeker’s Allowance (JSA) have been frozen.

But now, in response to a parliamentary question, Newton has revealed the spending on specific benefits for disabled people between 2009/10 and 2016/17.

The Canary has analysed the figures. They show that, in real terms, the DWP has actually cut disabled people’s money; contrary to previous claims. 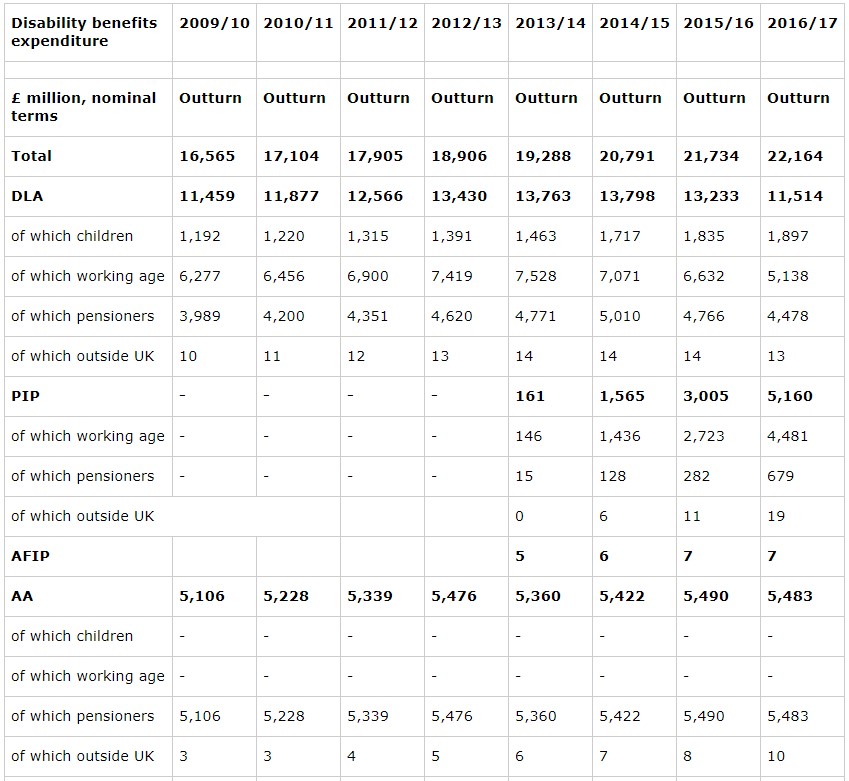 Between 2009 and 2017, total inflation was 27.5%, based on the actual increase over the full calendar years in question. Because, in layman’s terms, something that cost £10 in 2009 would cost £12.75 in 2017. But, what Newton’s figures show is that despite the DWP increasing the amount of money it spent on disabled people’s benefits, they have not kept up with inflation. On average, people have actually lost out.

These figures are approximate. This is because the Bank of England works out the inflation rate by calendar year. But the DWP works its spending out per financial year (April-March). If you did the same calculations based on total inflation between 2009 and 2016, both DLA and Attendance Allowance still come in with real terms losses of £121.58 and £116.85 respectively.

The Canary asked the DWP for comment, but it had not responded at the time of publication.

These figures reveal the stark reality behind the Tory (and previously Tory/Lib Dem) financial assault on disabled people.

This is the hostile environment for disabled people shown in hard numbers.

The DWP have for a long time claimed they spend £50bn a year on disabled people, this release comprehensively shoots down that claim and exposes the lies they tell to justify their atrocious policies.

In January, a committee of the Council of Europe said the UK government had breached part of its obligations under a treaty it signed up to. Specifically, it said that levels of spending on benefits were “manifestly inadequate”, leaving people below the poverty line. Also, the UN has criticised the government and DWP for leaving disabled people with “severe economic constraints” due to austerity and cuts. But the DWP does not agree with these conclusions.

If you needed any more evidence that the DWP was throwing disabled people into poverty, the fact its benefit spending increases have not kept up with inflation should be it. But the DWP has a history of denying any wrongdoing, even in the face of the gravest of evidence.