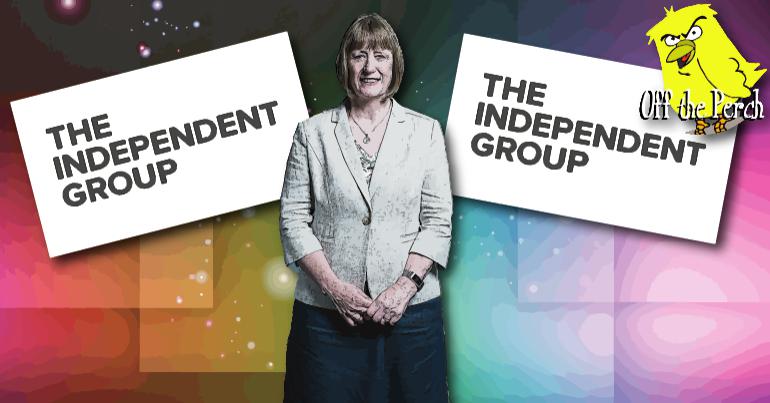 The Independent Group is unlike any political party in the UK. Not because of its policies (of which it has none), but because it isn’t actually a ‘party’ – it’s a private company. This has so far allowed it to avoid declaring who funds it.

A political party or group receiving this level of coverage and exposure but that hasn’t declared who’s funding it is dodgy as hell, and tbh it’s quite telling that liberal journos who have spent three years going on about campaign financing in the EU referendum are quiet on this

And guess what sort of politician that’s attracting?

No one makes the decision to leave the Labour Party easily, Joan included.

But as Joan was one of the few London MPs to have a taxpayer subsidised 2nd home, and voted to keep MP expenses secret, there aren’t many people I know who’d find it difficult to say goodbye either. https://t.co/TmpIKtwqk5

Overnight Joan Ryan became the 8th Labour MP to join the ´Independent Group’. She’s the Chair of Labour ´Friends of Israel’ & 6 of the 8 are Supporters of LFI. Moreover Ryan was caught on camera discussing £1m of MPs trips to Israel. Yet we’re being gaslighted to ignore all this https://t.co/aTzq1z9NVl

There was surely no public interest in Joan having spent £4,500 of expenses on her 'second' home – in her constituency – before flipping it with her 'main' home, in south London. Joan felt deeply wronged by the Telegraph smearing her so outrageously. https://t.co/CWCJo0uTsk

When asked what attracted her to the Independent Group, Joan Ryan put her phone down and glared at us.

“Do you mind?” she said. “I’m speaking to a man about getting a new conservatory put in.”

When asked how she’d be funding this lavish extension, Ryan tossed her head back and laughed.

“If you’ve got a problem, direct it to our complaints department,” she said – giving us the finger.

Unfortunately, it turned out the Independent Group doesn’t actually have a complaints department. It does have a ‘complaints’ page on its website, but much like its ‘policies’ page, it’s completely empty.

It’s unfair to say that no one in Britain wants a political party that:

It would be unfair to say that, because some media types obviously do crave a ‘party’ like this. That’s why they’re avoiding any scrutiny of the above.

Just a heads up. There’s no demographic in Britain to whom this new party appeals to more than senior journalists at national broadcasters and newspapers. It’s their worldview made into a party. Do bear that in mind in the coverage in the days and weeks ahead.