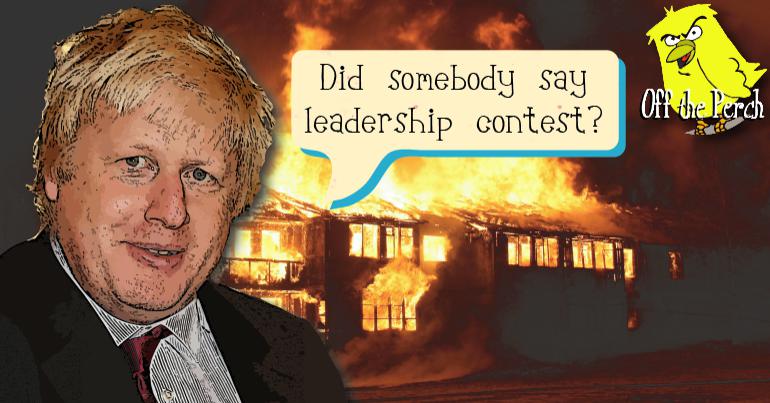 Boris Johnson once described May’s Brexit deal as a “suicide vest”. For some reason, he’s decided to strap this deal on and hit the detonator.

It couldn’t be… it couldn’t be because blowing the country up will trigger a leadership contest, could it?

Johnson couldn’t really be so hypocritical; so self-centred; so achingly fucking transparent, could he?

Johnson granted an interview to Off The Perch. The former foreign secretary showed up ten minutes late – slithering through the window like a snake. Apparently he exudes some sort of slime that allows him to wriggle around in such a fashion.

When asked if he only supported May’s deal to have a shot at becoming leader, he answered:

No – I’m acting in the national interest.

When we pointed out he’d previously said this deal ‘goes against the national interest in a manner unseen since the Black Death’, he assured us that:

Recent discoveries suggest Britons actually loved the Black Death. Apparently it was more of a mild sniffle than anything, and it released the most fantubulous feelings of euphoria.

We asked if Brexit would be better than the allegedly fantastic Black Death. He responded:

It can’t be any worse.

He then slithered off to vote for the country being so fucked that he has a shot at leading it.