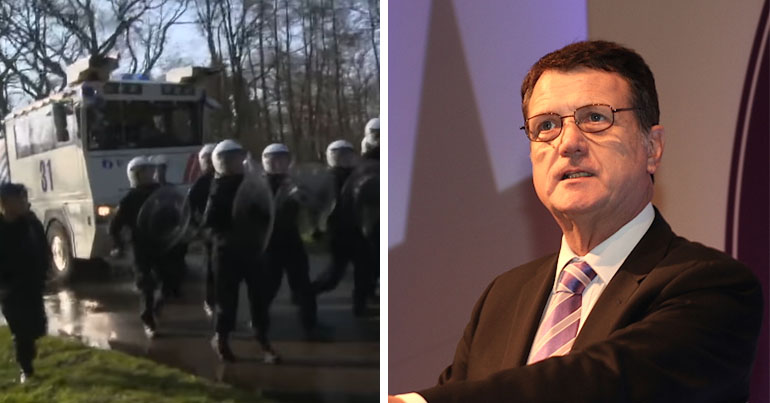 UKIP leader Gerard Batten claimed a water cannon “may be” deployed in London during pro-Brexit protests on 29 March. But people ridiculed his claim after reminding him that the city doesn’t have any water cannons. Even the Metropolitan Police got stuck in.

Police allegedly prepared for disorder at pro-Brexit protests on 29 March – the UK’s original deadline for leaving the EU. As a result, Batten warned on Twitter that the Metropolitan Police might bring water cannons out against protesters:

There are reports that water cannon may be deployed tomorrow in London, & that some of the police may try to aggregate and provoke Brexiteers. There is always the danger of provocateurs planted to cause trouble. I hope it is not true but I call on everyone present to be peaceful.

But London’s water cannons were scrapped in 2018. In fact, the Metropolitan police never even used them. And it didn’t take long for people to point out this gaping hole in Batten’s claim:

Eh? In 2015, @theresa_may then the home secretary, banned the water cannons from use anywhere in England & Wales, saying; “Our police have never and will never routinely carry guns or hide behind military-style equipment." They were sold in November '18. https://t.co/u9OOhqcvAd

The ones @BorisJohnson bought? Wouldn't get too worried…

They have. You're being lied to.

At the same time, others explained that Theresa May banned the use of water cannons in 2015:

I think you'll find it was Theresa May who did that. The then mayor of London failed to consult with the then home secretary before splashing out.

Yep, for scrap because the incredibly detail-oriented BJ forgot to check if they could be used in London. Feel free to run riot.

Meanwhile, the Metropolitan Police was curt with its response:

Those reports are indisputably false. https://t.co/46xi9cYNSl

Although let’s not forget that the Metropolitan Police were, at the time, “disappointed” by May’s ban on water cannons.

People also laughed at the UKIP leader for more than just his water cannon claim. Many wondered how police might “aggregate” protesters:

Make them gravel for it

Are they concrete plans? Trying to cement your place in history? #aggregatejokes

Meanwhile, some posted other ‘reports’ of crowd control methods the police could use:

I've read reports they're deploying ninjas and are going to release lions onto the street. There's always the danger that these lions and ninjas end up in a fight to the death. I hope it's not true but I call on everyone present to be vigilant.

There are also reports of imperial walkers ready to deploy

‘Brexit Day‘ protests were organised in the capital by a number of groups, including former UKIP leader Nigel Farage’s group Leave Means Leave. UKIP itself promoted the ‘Make Brexit Happen’ rally in London. But the party’s growing links to the far-right, led by Batten, have caused tension amongst the pro-Brexit movement.

It’s easy mock Batten for his inept statements. And we should all take an opportunity for laughter in these chaotic times. But let’s not forget that parliament itself hasn’t been any more competent in resolving the Brexit mess.