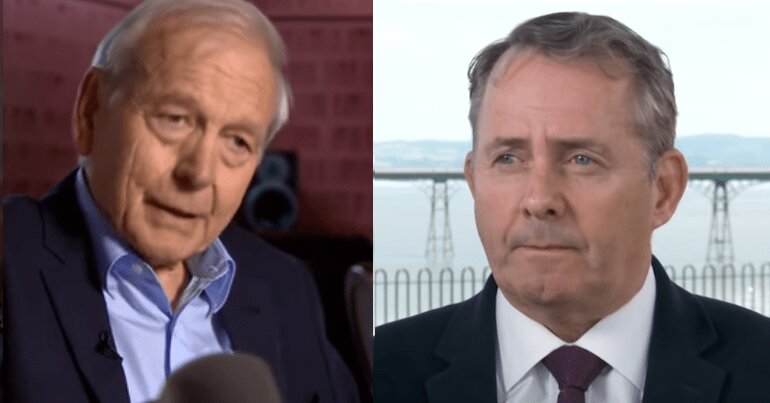 “Civil society in this country is at risk”

On the Today programme, Humphrys asked whether civil society could breakdown if hard Brexit isn’t delivered:

You really think that civil society in this country is at risk?

In response, secretary for international trade, Fox, toned it down a bit:

Shortly after, Humphrys appeared to channel Theresa May’s claim that parliament has essentially stitched up Brexit:

You’re a Brexiteer… the vast majority of your colleagues are Remainers. Are we at the stage… where we are able to make the claim that perhaps a lot of this has been manipulated quite deliberately by MPs who believe it is in the best interests… of the nation that we stay in the European Union notwithstanding that Brexit vote and they have found various ways… to engineer that outcome.

But again, Fox distanced himself from Humphrys’ claim:

What I do question is their willingness to stand by their manifesto, which said they would implement the decision

“More moderate than the BBC interviewer”

Shocked to hear Humphrys encouraging @LiamFox to agree with him about Brexit risks to civil society and to denigrate sovereign Parliament. To his credit, Fox did not oblige

Flanking Fox… from the right?

Liam Fox is a right-wing Brexiteer. He’s previously taken aim at workers’ rights, which the Conservative Party has already greatly weakened. On the Today programme, Humphrys could have asked Fox about his failure to make substantial progress on new trade deals for post-Brexit Britain. There have only been eight “continuity deals” agreed, which replicate the terms the UK already has with these countries through the EU. Yet Humphrys seemed to instead be flanking Fox from an even harder-right perspective. There was no real attempt to hold the government minister to account. Terrible show from the BBC.