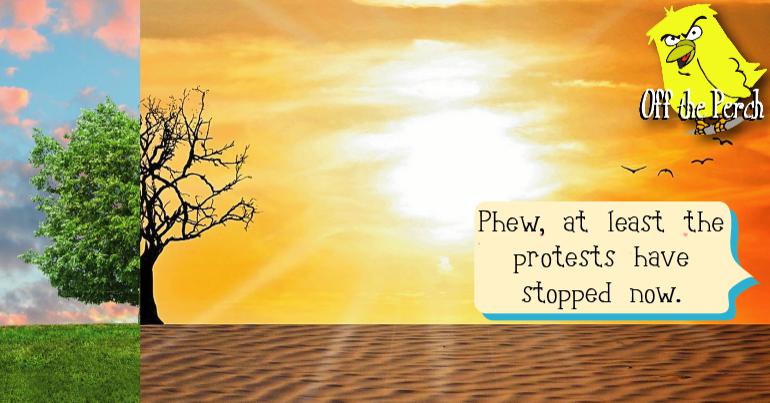 Climate change. That’s a thing. They used to call it ‘global warming’, but it didn’t convey the cataclysmic fuckery we’re unleashing. They’ve actually stopped saying ‘climate change’ now, and instead, use ‘extinction event’.

But still – BEST NOT MILDLY INCONVENIENCE ANYONE WHEN PROTESTING ABOUT IT.

The protest group Extinction Rebellion has been closing down parts of London. Or, as elements of the media are putting it:

Being a big, flipping nuisance for some reason or other – probably just for the attention.

Some protesters with more patience than saints have pointed out that climate change could result in outcomes as progressively catastrophic as:

The complainers have responded by whining:

How will making me seven minutes late to work fix anything?

Obviously someone needs to do something, but why can’t it be somebody else, and why can’t what they do be nothing?

I’m still not convinced it’s real – let’s wait and see. If it completely kills all life on the planet, then I’ll concede I was wrong.

The climate protests are just that – PROTESTS.

THE POINT IS TO CREATE INCONVENIENCE TO DRAW ATTENTION TO SOMETHING IMPORTANT.

AND IF THE PEOPLE COMPLAINING THINK THEY’RE INCONVENIENCED NOW, JUST WAIT UNTIL THEIR HOUSES ARE SUBMERGED IN FUCKING SEA WATER!