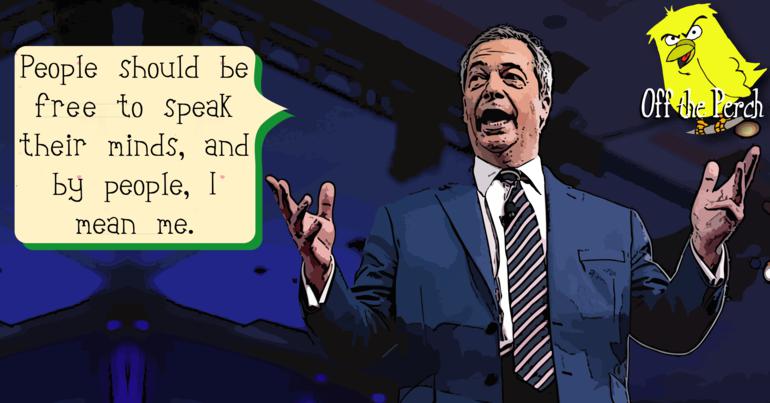 Jo Brand recently made a joke about using battery acid to ‘milkshake’ hard-right hate shits. She made the joke on a radio show designed to “test the boundaries of what it’s OK to say and not say”. Given the political landscape, the gag obviously falls into the category of things you probably don’t want to joke about.

What’s surprising is who she actually offended. Because most enraged are the people who usually argue that you should be able to joke about whatever you want. Which is to say whatever they want, obviously, because you can’t have people making fun of them.

Nigel Farage was giving a speech about how he intends to ‘pick up a rifle’ if Brexit gets halted when he heard the news. The speech went:

People in this country have gone mad with political correctness – you can’t say anything these days! They say that I’m a racist just because I did a big racist poster and also some other things. You know what I say to them?

I say… sorry… hang on a minute… I’m just learning that – oh no you don’t – some leftist fucking garbage woman has made a joke at my expense. Police! Police! Someone call the police!

Farage later asked what would happen in a parallel universe in which he was the one to say something awful:

I am sick to death of overpaid, left wing, so-called comedians on the BBC who think their view is morally superior. Can you imagine the reaction if I had said the same thing as Jo Brand? pic.twitter.com/hCEFSCqMGI

If it was anything like this reality, he’d probably get invited on to do Question Time for the millionth time.